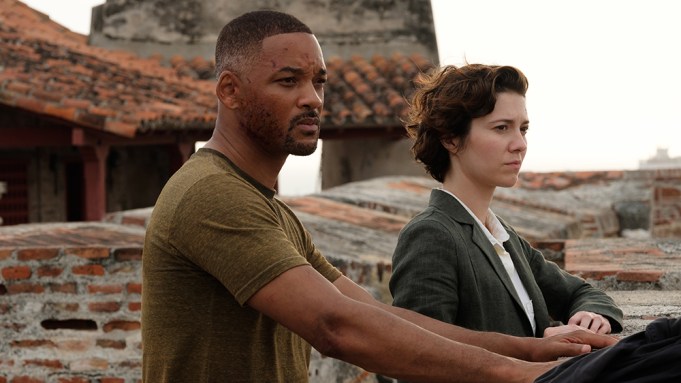 Will Smith’s “Gemini Man” topped the animated comedy “The Addams Family” with $1.6 million at 3,000 North American sites on Thursday night.

Paramount’s sci-fi thriller launched similarly to Brad Pitt’s “Ad Astra,” which earned $1.5 million from Thursday previews before opening with $19 million. “The Addams Family” brought in $1.3 million at about 3,000 sites on Thursday.

Both new titles are likely to trail Warner Bros.’ second frame of “Joker,” which outperformed expectations last weekend with a $96.2 million domestic bow. The Joaquin Phoenix-starrer, which has hit $130 million domestically and $280 million worldwide in a week, should take in as much as $45 million in North America this weekend.

“Gemini Man” debuts at 3,642 locations, with more than a third of those screening the film in high frame rate 3D+ format, employed by director Ang Lee to show Smith alongside a younger clone of himself. After a nearly 20-year gestation to the big screen, “Gemini Man” is aiming to make between $24 million and $29 million from 3,642 venues. Paramount and Skydance Media shelled out $138 million to invest in those hyperrealistic visuals, while Fosun and Alibaba helped finance the movie.

Reviews have been mostly downbeat with a current 29% score on Rotten Tomatoes. David Benioff, one half of the “Game of Thrones” creative duo, wrote the script along with Billy Ray and Darren Lemke. The cast also includes Mary Elizabeth Winstead, Clive Owen and Benedict Wong. “Gemini Man” kicked off at the international box office last weekend with $7 million in five markets and will expand to 54 territories, including the United Kingdom, Russia and Mexico.

MGM’s “The Addams Family” has been projected to earn $21 million to $27 million from 4,007 venues. The PG film, which has been marketed toward family audiences, follows the characters Morticia, Gomez, Wednesday and Pugsley as the Addams family brings its love of the macabre to 21st century life in New Jersey. The star-studded voice cast includes Oscar Isaac, Charlize Theron, Chloe Grace Moretz, Finn Wolfhard, Nick Kroll, Bette Midler, Allison Janney, Elsie Fisher and Snoop Dogg. Reviewers have been unimpressed, earning the film a 32% score on Rotten Tomatoes.

The weekend will also see the launch of Adam Devine’s comedy “Jexi” at 3,600 venues amid modest expectations in the $2 million to $7 million range. Devine stars as a man addicted to his phone, whose life changes thanks to a digital life coach named Jexi. The movie is the last theatrical release by CBS Films before it’s absorbed into CBS Corporation’s Entertainment Group.

The overall North American box office has generated solid numbers in recent months, but still trails last year by 5.4% with $8.69 billion as of Oct. 10, according to Comscore.

“Three wide-release newcomers will take on the formidable ‘Joker’ that has captured the world’s attention and become a box office juggernaut while proving that the fall season remains a haven for challenging films that push the envelope and draw intense interest from moviegoers,” said Paul Dergarabedian, senior media analyst with Comscore.

The weekend will also see the North American debut of South Korean filmmaker Bong Joon-ho’s acclaimed drama “Parasite,” winner of the Palme d’Or at the Cannes Film Festival. Neon is launching “Parasite” in a platform release at three theaters in New York and Los Angeles.