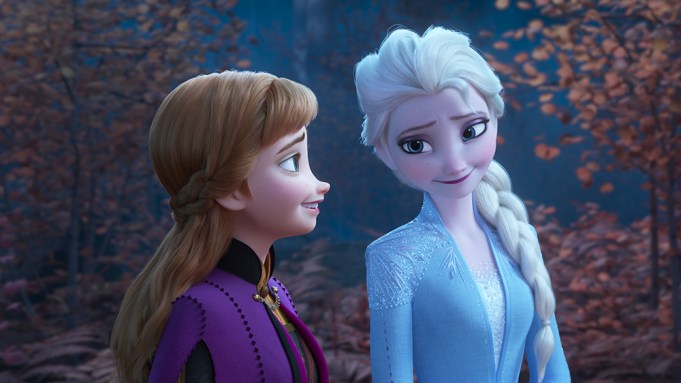 Disney’s “Frozen 2” is heading for a record of at least $140 million over the five-day Thanksgiving holiday in North America, early estimates showed Wednesday.

The animated adventure will easily top the $109.9 million record set by “The Hunger Games: Catching Fire” in 2013 during the five-day period. “Frozen 2,” which opened on Nov. 22, should go past the $300 million mark by the end of the weekend. The sequel is coming in well above forecasts of $100 million to $120 million during the Thanksgiving holiday.

Lionsgate’s opening of mystery comedy “Knives Out” is showing plenty of traction with early estimates of $40 million for the five-day holiday, which includes $3.7 million from previews. “Knives Out” opens in 3,391 sites Wednesday amid strong reviews with a stellar 96% score on Rotten Tomatoes.

“Knives Out” had been forecast to open in the $20 million to $25 million range. The studio raised its guidance Wednesday to the $28 million to $33 million range but other tracking was signficantly higher.

The film, directed by Rian Johnson, centers on a family gathering that takes a turn for the macabre when the patriarch (Christopher Plummer) dies after his 85th birthday party, leaving everyone a suspect. The cast includes Daniel Craig, Chris Evans, Ana de Armas, Jamie Lee Curtis and Toni Collette. “Knives Out” is produced by MRC and T-Street.

Universal’s counter programmer “Queen & Slim,” starring Daniel Kaluuya and Jodie Turner-Smith, is also beating forecasts with about $15 million for the five days. The film had been expected to earn $10 million over the extended holiday. Melina Matsoukas, the filmmaker behind Beyonce’s “Formation” music video, directed the film, while Lena Waithe wrote the script.

“Frozen 2” comes six years after the original “Frozen,” which was a smash hit as the highest-grossing animated movie ever, raking in $400 million in North America and $1.28 billion worldwide in 2013. “Frozen 2” sees the return of the popular characters Elsa (voiced by Idina Menzel); her sister, Anna (Kristen Bell); Kristoff (Jonathan Groff); and Olaf (Josh Gad) as they venture beyond the kingdom of Arendelle to find out why Elsa was born with magical powers.