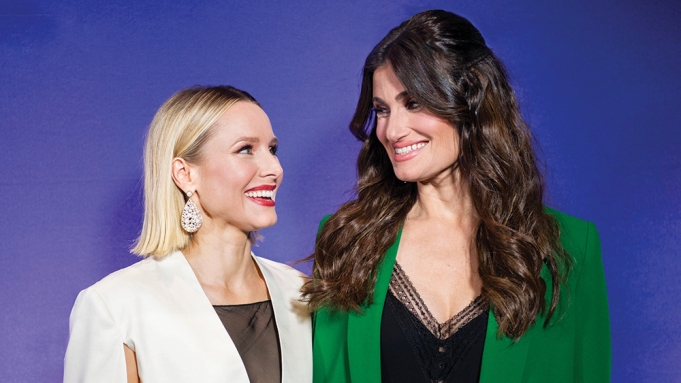 Welcome to a special edition of “The Big Ticket,” Variety and iHeart’s movie podcast.

Here are some of the highlights…

Kristen Bell says “Frozen’s” impact goes way beyond what kids get out of it. “There have been numerous times that people in our team have heard of adults being in a really low place and said, ‘I was considering suicide, and I saw “Frozen” and I realized I can be me,’” she said.

Bell’s new show for Disney Plus, “Encore,” reunites former high school theater club members to perform their school musical. “There’s so few things that unite us all, but you say the words ‘high school’ to anyone on the planet, and they get a pit in their stomach and they feel like they’re going to puke, because high school is traumatic,” she said. “To come back, it’s like time travel and people make amends, people say things they wish they had said, people tell their stories: ‘I behaved like a bully because this was happening to me.’ You watch human connection happen right in front of you. People come out of the closet. It’s beautiful to watch, and it’s one of the things I’m most proud of.”

Idina Menzel knows Ariana Grande would love to play Elphaba in the movie adaptation of “Wicked,” but she still wants to do the film after having won a Tony for her work as the iconic witch back in 2004. “I still think that I should be Elphaba and I should just show up, slap that green makeup on me and get some CGI and Benjamin Button the s— out of that,” Menzel laughed, adding, “I mean I love you, Ariana, but I still am relevant here.”

Menzel also says she’s ashamed to admit it but she recently tried to use her “Frozen” fame with a doctor’s receptionist to get her son in earlier than their scheduled appointment. “I was like, I don’t know, you know, I’m an actress and I have to get to this premiere tonight. ‘Do you have any daughters? It’s called “Frozen” and I sing “Let It Go,”’” she said.

The receptionist wasn’t impressed: “She actually didn’t give a s— and that teaches me a lesson.”

Josh Gad participated in an early reading of “Frozen” when it was called “Anna and the Snow Queen” with Jason Biggs, Megan Mullaly and Ginnifer Goodwin. Even so, he still had to audition to play Olaf in the movie. His audition song? “You’ve Got a Friend in Me.”

Jonathan Groff recorded a song Kristen Anderson-Lopez and Bobby Lopez wrote for him for “Frozen 2” after he didn’t get the chance to sing in the first movie, but the tune got cut. “I was like, ‘Oh, okay, they tried. It didn’t work. I totally get it. It’s completely fine,’” Groff recalled.

Then they wrote him another song, “Lost in the Woods,” which did make it into the movie.

There’s been a lot of talk on social media about Elsa getting a girlfriend one day. LGBTQ fans love to dissect animated Disney films for any hints of queer themes, storylines or characters. I asked Evan Rachel Wood, who came out as bisexual eight years ago, if she thinks an animated Disney film will ever feature a lead character who is queer. She laughed, “I’m still not convinced that we haven’t already with Mulan and Hercules. Honestly, Mulan is still up for debate. I think there’s a little bi-energy going on there.”

“Frozen 2” co-director and chief creative officer of Walt Disney Animation Studios Jennifer Lee says an LGBTQ lead character isn’t out of the question. “I mean there are no limits to the characters we can have,” she said.

You can listen to all the “Frozen 2” interviews below. You can also find “The Big Ticket” at iHeartRadio or wherever you listen to your favorite podcasts.