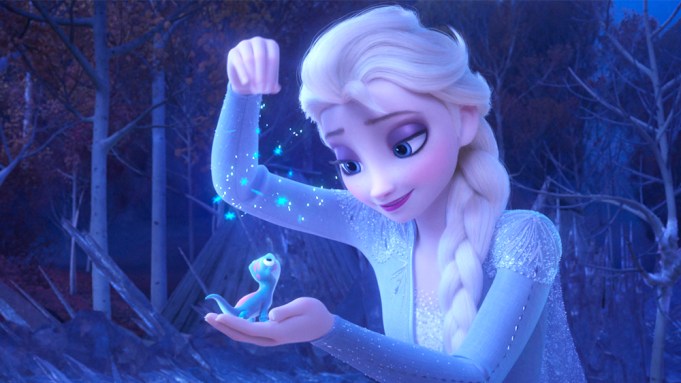 The animated adventure soared past the previous Thanksgiving benchmark held by 2013’s “The Hunger Games: Catching Fire” and its $109 million bounty between the Wednesday and Sunday period. Like “Frozen 2,” the “Hunger Games” sequel opened a week ahead of Thanksgiving.

After two weekends in theaters, “Frozen 2” is nearing the $300 million mark in North America with ticket sales currently at a massive $278 million. The fantasy follow-up made $130 million in its inaugural outing, cementing a new high-water mark for Disney Animation.

Overseas, “Frozen 2” brought in another $164 million this weekend for an international tally of $451 million. The film has made $739 million at the global box office in just 12 days and will likely be the sixth Disney movie this year to cross $1 billion by the end of its theatrical run.

Propelled by critical raves and audience adoration to match, Lionsgate’s “Knives Out,” a murder mystery directed by Rian Johnson, launched ahead of expectations, securing second place on domestic charts with $27 million over the weekend from 3,391 theaters and $41.7 million between Wednesday and Sunday. Heading into the weekend, the whodunit starring Daniel Craig, Jamie Lee Curtis and Chris Evans was projected to earn $20 million to $25 million in its first five days of release. The movie cost $40 million and looks to be a triumph for original, mid-budget content at multiplexes.

“Rian Johnson created a fresh and original crowd-pleasing film with ‘Knives Out’ and we are thrilled to see it connecting with audiences,” said Brye Adler and Jonathan Golfman, presidents of MRC Films, a co-producer on the movie. “It was an incredible collaboration between MRC, T-Street, and Lionsgate, who did a phenomenal job marketing and distributing the film.”

“Knives Out” is also resonating with international moviegoers. The film debuted overseas with $28.3 million, boosting its global total to $70 million.

Fellow new release, Universal and Makeready’s “Queen and Slim,” also exceeded expectations and is shaping up to be a win in favor of original fare. The romantic drama starring Daniel Kaluuya and Jodie Turner-Smith opened at No. 5, collecting $11.7 million over the weekend from 1,690 venues and $15.8 million over the five-day holiday period. Directed by Melina Matsoukas and written by Lena Waithe, “Queen and Slim” carries a roughly $20 million price tag. Over 50% of opening weekend crowds were African American, while 24% were Caucasian, 15% were Hispanic and 3% were Asian. More than 60% of ticket buyers were over the age of 25.

“At the heart of ‘Queen and Slim’ is a moving love story that is timely and groundbreaking,” said Jim Orr, Universal’s president of domestic distribution. “We’re really pleased with how ‘Queen and Slim’ opened and that audiences are responding.”

Holdovers, including Disney-Fox’s “Ford v Ferrari” and Sony’s “A Beautiful Day in the Neighborhood,” secured No. 3 and 4 slots, respectively, on box office charts. Matt Damon and Christian Bale’s sports drama, now in its third outing, earned $13 million over the weekend and $19 million during the five-day frame, propelling its domestic tally to $81 million. Tom Hanks’ feel-good film about Mr. Rogers made $11.8 million over the traditional weekend and $17.2 million over the holidays. After two weeks of release, “A Beautiful Day in the Neighborhood” has generated $34 million.

Overall, Thanksgiving racked up a solid $263 million in revenue, albeit not enough to best 2018’s record haul. Last year set a new benchmark in North America with $315 million, boosted by “Ralph Breaks the Internet,” Creed II” and “Fantastic Beasts: The Crimes of Grindelwald.”

However, this holiday season is already helping offset what has otherwise been a bleak November at the box office. Heading into the long weekend, ticket sales were behind over 7%, according to Comscore. Box office receipts are now down by 5.6%.