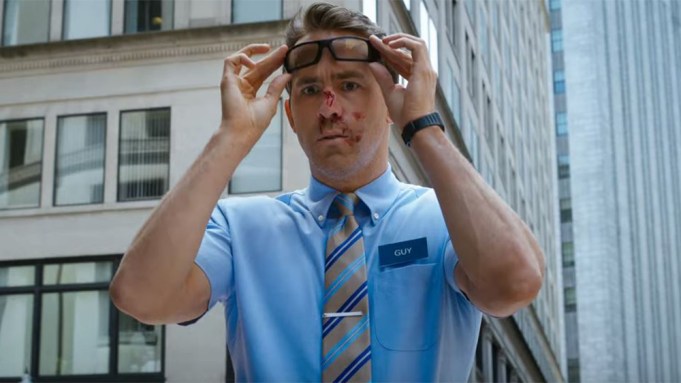 The first trailer for Ryan Reynolds’ “Free Guy” premiered Saturday at the CCXP convention in Brazil.

Reynolds stars as Guy, a bank teller and NPC (non-playable character) who discovers he’s living in a video game.

In the trailer, hostage situations, buildings being blown up and people shooting guns off in the street is depicted as part of an otherwise mundane life for Guy, who lives in Free City. One day, while working at his bank job, robbers rush in and tell everyone to get on the ground.

“Hey bud, you ever think that there’s gotta be more?” he asks Buddy, a security guard played by Lil Rel Howery, as they’re lying on the floor.

“More to what?” he replies.

“The stuff we do every day,” says Guy. “Being shot at, run over, taken hostage. Today’s gonna be different.”

Guy jumps up and attempts to stop the robbers, killing one and winding up with his glasses. He tries them on and is exposed to a completely part of Free City — which turns out to be an open-world video game — with pathways, missions and rewards laid out in front of him.

“Guy, this world, it’s a video game, and it’s full of bad guys,” Jodie Comer’s Molotov Girl tells him. “We need you to be the good guy.”

“Okay, well, enjoy your lifetime supply of virginity, off you go,” she says.

Channing Tatum, “Brittany Runs a Marathon’s” Utkarsh Ambudkar, and Joe Keery also star in the movie, directed by “Stranger Things” executive producer Shawn Levy from a screenplay by Matt Lieberman and Zak Penn. Reynolds is also a producer on the film.