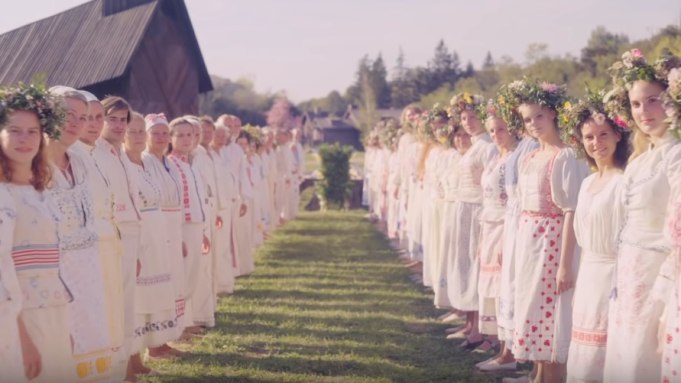 What if flower crowns were terrifying?

The director of “Hereditary,” Ari Aster, is back with another creepy thriller, “Midsommar,” watch the first trailer now.

The summer film centers around a vacationing couple in a small Swedish village. The trip starts out slightly idyllic as main character Dani, played by Florence Pugh, becomes acquainted with the town. But as her time lingers she becomes increasingly more suspicious of their neighbors as its cult-like tendencies become apparent.

“You can’t speak, you can’t move,” a local woman, explains in the trailer. “But this opens you up to the influence. And it breaks down your defenses. Trust me. You’re gonna love it.”

As the Swedish woman’s assurances continue, though, viewers see the cult’s members, all clad in white gowns, play out creepy candle-lit rituals and chants. The town’s lush green landscape seen at the beginning of the trailer soon turns over to dark and menacing dungeons – it’s clear that the vacationing couple are certainly not in paradise anymore.

The film also stars William Jackson Harper known for his portrayal of Chidi Anagonye from “The Good Place” and Will Poulter from “Black Mirror: Bandersnatch” and “We Are The Millers.”