‘When Money Moves In, Women Are Pushed Out,’ Says USC’s Stacy Smith in Cannes 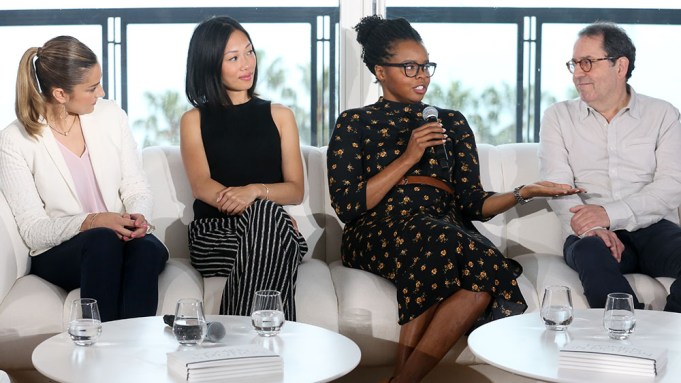 Women are making strides toward parity in the film business but there’s much more progress to be made, panelists at the Kering Women in Motion talk said Saturday

While women are gaining more visibility on-screen — 40% of movies were led or co-led by females in 2018, according to USC professor Stacy L. Smith – behind the scenes the figures are more dismal for women in key filmmaking roles. Marvel may have hired “The Rider” director Chloe Zhao for “The Eternals,” but overall, bigger-budgeted films are being helmed by men.

“When money moves in, women are pushed out. Women aren’t projected into leadership roles, and when they are, they are punished more harshly,” Smith said at the talk moderated by Variety editor-in-chief Claudia Eller.

The numbers are even more daunting for female minority directors. According to USC research released earlier this year, only seven of the 46 women working across the 1,200 most popular films in the last 12 years were directed by female minorities. And women still lag behind men in key studio roles; Smith said that in the major studios, only 25% of leadership roles are held by women.

“The gains in real life will die out if film studios do not tell the same story,” said Smith, joined on the panel by Sony Pictures Classics co-president Michael Barker, Anita Gou, producer of Sundance movies “The Farewell” and “Honey Boy,” film critic Jacqueline Coley and Kirstin Benson, VP of global entertainment at Getty Images.

Eller noted that Sony Pictures Classics have hired more women than any other studios — a fact which even Barker said he had not realized.

“At any given moment, you go for the projects or films that you think are the best, the finest and for which you can find an audience. These are the projects we chose,” said Barker.

The film industry veteran said things are changing, with female directors taking on bigger projects, like Zhao on “The Eternals.”

Gou stressed the importance of having more women in leadership roles to provoke a trickle-down effect. “Directors are in hiring positions: they assemble their crew. In both our pictures, we had female DPs. So you see that effect when you put women or people of color in those positions,” said Gou.

Benson said gender parity is also needed among photographers because the “female gaze is a real thing.” She noted that only two of the 250 photographers on the red carpet are women — and both are Getty staff.

Coley, meanwhile, said that increasing access for minority critics to movies that play at high-profile festivals is one of the key factors that could lead to greater inclusion. “Diversity is being invited to the party, inclusion is being asked to dance,” said Coley. “Cannes is a cost-prohibitive festival for many; (some critics) can’t make it here,” said the Coley, who suggested that film companies could allow reviewers to watch some anticipated films the same night they play at a festival in a different setting.

The panel also discussed the need to enforce quotas to create a 50-50 parity.

“The idea of a quota is a temporary solution. I think it’s a necessity because of the long history of things not changing,” said Gou.