Elsie Fisher on Oscars Snub: ‘I’m One of Those Losers!’ 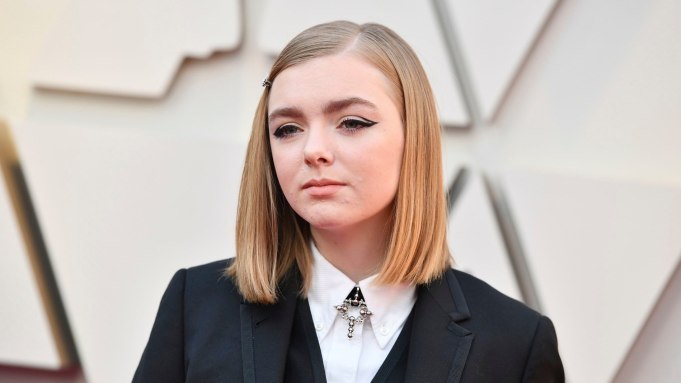 When “Eighth Grade” director Bo Burnham won the WGA award for best original screenplay, he was the first writer to win that award without also earning an Oscar nomination for the same film.

“To the other nominees in the category — Have fun at the Oscars, losers!” Burnham joked from the podium. Meanwhile star of “Eighth Grade” Elsie Fisher is at the 2019 Oscars, not as a nominee but a presenter.

When asked if she ever thought she’d be here, Fisher was at a loss for words.

“No! I mean like, nope. Nope that’s my answer,” she told Variety‘s Marc Malkin on the red carpet.

But she did have a response to Burnham’s jokes. “I am one of those losers!” she proclaimed.

“I may not be nominated here,” she continued. “But I am presenting which is very cool also. To be able to take ‘Eighth Grade’ from Sundance last year to here now is very special.”

When asked which performance from tonight’s Oscars she is most excited to see, Fisher answered “Shallow” from “A Star Is Born.”

“Oh my god, I mean ‘Shallow’ with Bradley [Cooper] and Lady [Gaga],” she said before showing love for “Bohemian Rhapsody” too. “But I mean I think Brian May and Roger Taylor performing is gonna be pretty cool, too.”