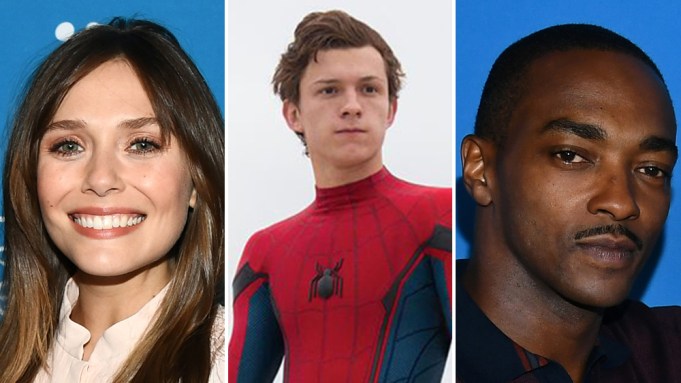 Marvel fans aren’t the only ones heartbroken that Tom Holland’s Spider-Man might not be in the Marvel Cinematic Universe anymore.

“It really is sad. First off, he’s the greatest Spider-Man to me. He actually has that youthful energy,” Elizabeth Olsen, who plays Scarlet Witch in the MCU, told Variety at D23 on Friday. “He’s been incredible. It’s been really lucky that we’ve been able to work with him. I think it’s a big loss and it’s really too bad.”

Olsen joked that people should start a petition online to keep the webslinger in the MCU, which may have been a reference to the #BoycottSony hashtag on Twitter last week. When fans learned of the divorce between Disney and Sony, many pointed fingers at Sony for not compromising with Disney to share the character.

Anthony Mackie and Sebastian Stan, stars of the upcoming Disney Plus series “Falcon and the Winter Soldier,” also made light of the messy situation.

Pointing to his heart, Mackie said, “We will always have little Tom right here.” Simultaneously, Stan looked directly at the camera and said, “Tom, you are always on my mind.”

Earlier this week, Hawkeye actor Jeremy Renner called out Sony on Instagram, asking them to return Spider-Man to creator Stan Lee and Marvel.

“Hey @sonypictures we want Spider-Man back to @therealstanlee and @marvel please, thank you,” he posted.

“We’ve all read rumors, we’ve all read press releases, but you never know what’s going to happen. I’m holding out hope and being optimistic that this isn’t the final chapter of that story between those characters,” he told Variety. “I would love to see those characters continue to share the screen together. And I don’t just mean Happy and Aunt May, I mean Tom Holland, Spidey and the other heroes from the MCU.”