Why ‘Dumbo’ Didn’t Soar at the Box Office 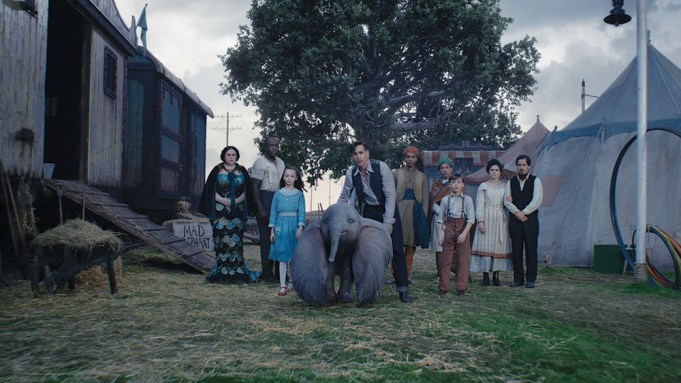 “Dumbo” nabbed the top spot at the domestic box office last weekend, but Disney’s latest re-imagining didn’t fly as high as expected. Despite the cast of Colin Farrell, Danny DeVito, and Michael Keaton, the nearly eight-decade old property showed that not every remake is guaranteed to pack a major punch.

Tim Burton’s live-action reboot of the 1941 cartoon collected $45 million from 4,259 venues, falling short of expectations that anticipated a launch north of $50 million. Overseas, the baby elephant with inconveniently large ears got off to a better start, earning $71 million for a global weekend haul of $116 million.

Those numbers hardly signal disaster for the Magic Kingdom, but it does represent the lowest domestic opening yet for one the studio’s re-imaginings of its animated classics. High-profile remakes such as 2017’s “Beauty and the Beast” and 2016’s “The Jungle Book” soared past the $100 million mark in their opening weekends.

Part of the reason for the underwhelming bow is because while the peculiar pachyderm is certainly well-known, the character doesn’t have the same universal appeal as, say, the Belles and Simbas of the cartoon world. The original movie — about a circus elephant ridiculed for his giant ears — first graced the big screen nearly 80 years ago. “Beauty and the Beast” and “The Lion King,” on the other hand, were first adapted in the ’90s, making them more familiar to today’s young parents as well as their children.

“Titles that are pulled from the much older classic archive such as ‘Dumbo’ — beloved as they are — sometimes have more of an uphill battle versus their more recent counterparts to inspire massive audience enthusiasm,” said Paul Dergarabedian, a senior analyst at Comscore.

The studio shelled out $170 million to produce “Dumbo,” not including marketing and distribution fees. That means the movie will have to resonate with audiences across the globe to avoid ending up in the red. Outside of North America, “Dumbo” saw the strongest debut in China ($10.7 million), followed by the United Kingdom ($7.4 million), and Mexico ($7.2 million). The film was well received in the Middle Kingdom, but its opening weekend was on the softer side compared to recent Disney titles in that territory. While Dumbo is recognizable in Europe, the character isn’t as familiar to Asian audiences. Warner Bros.’ “Shazam!” debuts in China next weekend, which could further curb momentum.

“Dumbo” didn’t have the benefit of solid reception, either. Audiences, however, were more favorable toward the movie than critics, awarding it an A- CinemaScore compared to its tepid 50% on Rotten Tomatoes. Reviews don’t necessarily sway audiences of family movies (2010’s “Alice in Wonderland,” for example, grossed over $1 billion and had a 51% on Rotten Tomatoes), but enthusiasm from the critic community can certainly bolster positive word of mouth.

Box office sages suggest that “Dumbo” could play like “Mary Poppins Returns,” which got off to a slower start, but picked up steam over time. It ended its theatrical run with $348 million worldwide, including $171 million in North America. That movie, which starred Emily Blunt as the magical nanny, wasn’t a reboot, but rather a direct sequel to the 1964 film. It’s not quite as old as “Dumbo,” but it had been a while since moviegoers were treated to a spoonful of sugar. However, that opened over the Christmas period, which has more box office potential than spring break.

“It’s a little early to give a final analysis on ‘Dumbo’ because it could develop legs. ‘Dumbo’ doesn’t have a rabid fanbase to turn out on opening weekend like some of its other remakes do,” said Shawn Robbins, chief analyst at Boxoffice.com.

It’s also possible that fellow Disney movie “Captain Marvel” might have cannibalized some of “Dumbo’s” ticket sales. While the crowd for “Captain Marvel” skewed slightly older, both films appealed to a broad demographic. Brie Larson’s superhero blockbuster generated another $20 million this weekend, a solid result considering it’s been in theaters for nearly a month. The tentpole has grossed $353 million in North America to date.

It only gets more crowded on the family front. Next weekend, “Shazam!,” the latest superhero offering from DC, also opens at the domestic box office. The film looks lighter than the comic-book studio’s usual end-of-the-world sagas, which could entice a more universal group of ticket buyers. “Shazam” also has the advantage of solid reviews.

“‘Shazam!’ is leaning toward a teenage audience, so that could be a good thing for ‘Dumbo,'” Robbins added.

Executives at Disney believe the lead-up to Easter on April 21 could continue to be lucrative with many children on vacation. “Dumbo” is also one of the few PG titles currently in theaters. “Captain Marvel” and “Shazam!” are both rated PG-13.

“We’re very encouraged by the start,” said Cathleen Taff, Disney’s head of global distribution. “Our Cinemascore is strong, and we’re well positioned as a top option for family audiences.”

“Dumbo” is the first of three high-profile reboots the studio has set for 2019. Guy Ritchie’s “Aladdin,” starring Will Smith (May 24), and Jon Favreau’s “The Lion King” (July 19) are both poised to become hits. Though almost no footage of “The Lion King” has been revealed, exhibitors are particularly optimistic about that star-studded re-imagining, which recruited the likes of Beyonce, Donald Glover, and James Earl Jones to bring Simba’s story back to the big screen.

“People have been asking, ‘Are audiences over the remake trend?’ and I don’t think so at all,” Dergarabedian said. “Expectations for ‘Dumbo’ were pumped up because it’s Disney. They’ve set the bar so high for themselves.”