Continue to Variety SKIP AD
You will be redirected back to your article in seconds
Sep 17, 2019 11:53am PT

‘Downton Abbey’ Movie Sequel? Producers Tease That They Have ‘Some Ideas’ 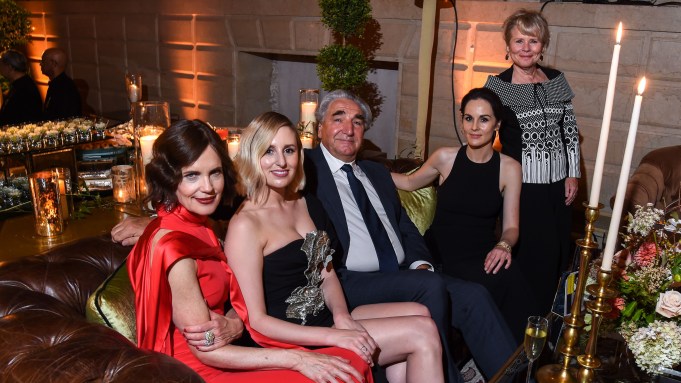 “Downton Abbey” holds the record as the most-nominated international show at the Emmy Awards with 69 nominations and 15 wins — and now, it stands a chance to nab an Oscar.

More than three years after the beloved series signed off the air following six critically-acclaimed seasons, “Downton Abbey” is making its big-screen debut.

“It was a sense of not disbelief, but relief, because the producers had been talking about it for two or three years, and I had said to them, ‘Good luck with that because it’s not going to happen because there are so many of us and we’re all over the world now because we are not in the shackles of your contract anymore,'” joked Hugh Bonneville, who plays Robert Crawley, Earl of Grantham, on the red carpet at the film’s premiere on Monday.

The movie, which centers around the King and Queen visiting Downton, brings the entire original cast and producers back together, including creator Julian Fellowes (already an Oscar winner himself for writing “Gosford Park”) and executive producer Gareth Neame.

Jim Carter, who plays Downton’s butler Mr. Carson, said at Lincoln Center’s Alice Tully Hall in New York City that fans started asking about a possible movie as soon as the series ended. “Every interview we did afterward about other projects always ended up with the microphone turned off: ‘Will there be a film?’ Every fan we met in the street: ‘Is there going to be a film?’ So here we are. It’s a logical conclusion.”

“Downton Abbey” hasn’t even hit U.S. theaters yet, but producers are already thinking about a sequel — assuming the first film is successful.

“We’ve got some ideas of things we would explore, if we were in the lucky position that that comes about, but it all depends on the next few days,” Neame told Variety, adding, “We like to think we live in democratic times and it’s all about the fans and the audience — if they love this and watch it, well then, we’re out to do more. Anyway, whatever happens, I hope people love it. The timing is just right. A three-year gap from such loved characters is quite a time, and I think people have so missed them, and they’re as good as they ever were, and more.”

“I don’t think we can talk seriously about that, until we see how this film is received,” he said. “And then, I’m sure there will be a conversation about it, though I couldn’t tell you which way it will go.”

Michelle Dockery, who rose to international fame for her work as Lady Mary, isn’t surprised “Downton” has made it to the movies.

“I think ‘Downton’ was always quite cinematic in its cinematography,” she said. “So I think it really works for the big screen.”