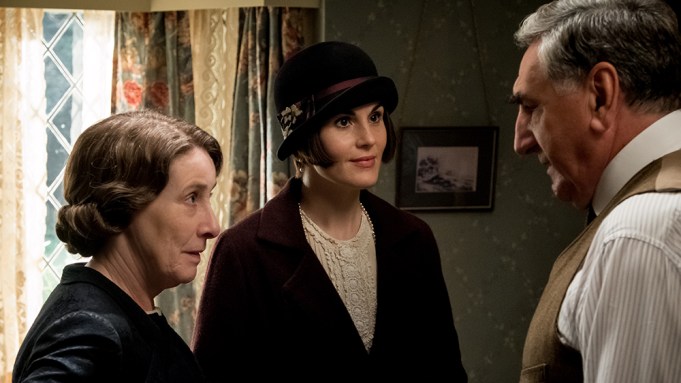 The feature film version of “Downton Abbey” is heading for an impressive $30 million opening weekend at 3,079 sites for an easy victory at the North American box office, early estimates showed Friday.

The launch of Brad Pitt’s space drama “Ad Astra” will land in second with about $20 million, while Sylvester Stallone’s action-thriller “Rambo: Last Blood” will reel in around $18 million. STX’s second frame of “Hustlers” should finish fourth with about $16 million and Warner Bros.’ third weekend of “It: Chapter Two” will follow in fifth with about $14 million to hit $176 million in its first 17 days.

Of the three new films, “Downton Abbey” is faring the best, easily out-performing pre-release forecasts — which had been in the $20 million range for each of the trio. The ITV series that aired in the U.S. as part of PBS’ Masterpiece Classics followed the lives of the Earl of Grantham and his family as well as the servants who work for them at the large manor house at the turn of the 20th century and won 16 Emmys during its six-season run from 2010 to 2015.

The movie is set in 1927 with the King and Queen of England stopping by Downton Abbey for a royal visit. The original cast members, including Michelle Dockery, Elizabeth McGovern, Maggie Smith, and Hugh Bonneville, are returning for the movie, which is distributed by Focus Features. Imelda Staunton, Geraldine James, Simon Jones, David Haig, Tuppence Middleton, Kate Phillips, and Stephen Campbell Moore have joined the cast.

Julian Fellowes, who created the series and wrote the film’s screenplay, is producing alongside Gareth Neame and Liz Trubridge. Neame produced the series and film through his Carnival Films banner. If estimates hold, “Downton Abbey” will set an opening weekend record for Focus, easily topping the 2015 mark of $22 million set by “Insidious Chapter 3.”

“Ad Astra” is debuting at 3,460 venues domestically. Pitt is playing a man who journeys across the solar system in search of his missing father, a dangerous renegade scientist (portrayed by Tommy Lee Jones). James Gray directed “Ad Astra” for Fox from a script he co-wrote with Ethan Gross.

Ruth Negga, Jamie Kennedy, and Donald Sutherland also star in “Ad Astra,” which premiered at the Venice Film Festival. Fox had planned to open the title on May 24 but Disney shifted “Ad Astra” to the fall after buying Fox’s movie assets. Gray began shooting the movie, which carries an $80 million budget, in 2017.

“Rambo: Last Blood” is hitting 3,618 locations, 37 years after the series launched with “First Blood.” The story centers on Stallone’s Rambo crossing into Mexico and taking on a violent cartel when the daughter of one of his friends is kidnapped. “Rambo: Last Blood” also stars Paz Vega, Sergio Peris-Mencheta and Yvette Monreal.