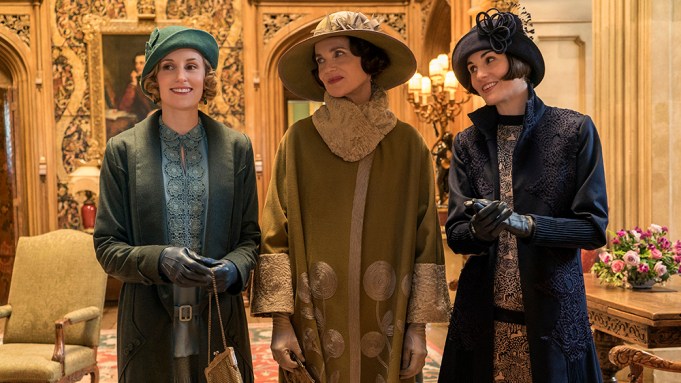 “Downton Abbey,” the movie continuation of the hit TV series centering on the Crawley family, has won Thursday previews with $2.1 million from 2,800 North American locations.

The trio of openers have each been forecast to open in the $20 million range. Warner Bros.’ third weekend of “It: Chapter Two” and STX’s second frame of “Hustlers” may also finish in the same vicinity, making the weekend’s contest for first place one of the most competitive within recent memory. “Hustlers” generated $43 million domestically in its first six days and “It: Chapter Two” has gone past $160 million in two weeks.

“Downton Abbey” will expand to 3,079 venues on Friday. The series followed the lives of the Earl of Grantham and his family as well as the servants who work for them at the large manor house at the turn of the 20th century. During its six-season run from 2010 to 2015, the series won 15 Emmy Awards and earned 69 Emmy nominations in total, making “Downton Abbey” the most-nominated non-U.S. TV show in the history of the Emmys.

“Ad Astra” will debut at 3,460 sites domestically. Pitt is playing a man who journeys across the solar system in search of his missing father, a dangerous renegade scientist (Tommy Lee Jones).

James Gray directed “Ad Astra” for Fox from a script he co-wrote with Ethan Gross. Ruth Negga, Jamie Kennedy, and Donald Sutherland are also starring in “Ad Astra,” which premiered at the Venice Film Festival. Fox had planned to open the title on May 24 but Disney shifted “Ad Astra” to the fall after buying Fox’s movie assets. Gray began shooting the movie, which carries an $80 million budget, in 2017.

Fox saw a strong performance in 2015 from its space-travel movie “The Martian,” which grossed $630 million worldwide. Sony’s 2016 space film “Passengers” pulled in $300 million in global box office. Reviews have been solid with an 81% rating on Rotten Tomatoes.

“Rambo: Last Blood” will hit theaters 37 years after the series launched with “First Blood.” The story centers on Stallone’s Rambo crossing into Mexico and taking on a violent cartel when the daughter of one of his friends is kidnapped. “Rambo: Last Blood” also stars Paz Vega, Sergio Peris-Mencheta and Yvette Monreal.

Year-to-date box office remains far behind 2018 with $8.17 billion as of Sept. 19, down 5.9%, according to Comscore. Paul Dergarabedian, senior media analyst with the tracking service, praised studios for offering a diverse selection of new and holdover cinematic offerings that will have appeal to a broad cross-section of moviegoers.

“This weekend’s lineup will impressively rival the small screen in terms of the depth and breadth of content available to audiences who now have an unprecedented assortment of entertainment options at their disposal,” he added.