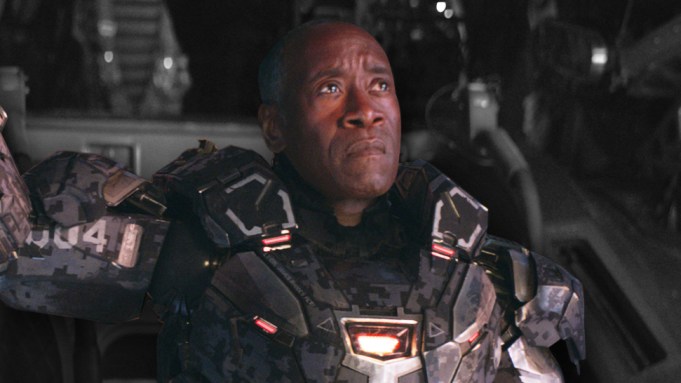 Don Cheadle said he was given an hour to decide if we wanted to join the Avengers. And if the pressure wasn’t high enough already, he received the call while putting on his daughter’s birthday party.

Cheadle revealed as much when he sat down with Variety‘s Marc Malkin for an episode of Variety and iHeart’s new film podcast, “The Big Ticket.”

Cheadle said Robert Downey Jr. and producer Kevin Feige called him during his daughter’s birthday party to tell him that Terrence Howard wouldn’t be returning as War Machine. They gave Cheadle an hour to decide if he wanted to replace Howard. “‘You just gotta take a leap of faith,'” Cheadle remembered them saying. “But that’s, like, ten years. That could be 12 years that we’re talking about,” said Cheadle. “I said, ‘Well, I’m at my daughter’s birthday party.’ They said, ‘Oh, take two hours.'”

Cheadle said he coincidentally saw Howard the very next day. “We never had any beef,” he said. The actors have known each other for years, most notably working together for the Oscar-winning “Crash.”

The actor revealed that he didn’t learn who disintegrates until the day of. “They were like, ‘you’re walking through him and he’s going — Sam’s disappearing.’ I was like, Oh, okay.’ Because we didn’t know. They kept it from us too,” he said. “When I inhaled, that was tough.”

When asked who he would want Thanos to snap into dust, he responded, “I think we all know. I’m on Twitter pretty heavily. Yeah. I’ve snapped that dude out a couple times.” Cheadle has taken aim at President Trump a number of times on Twitter.

Cheadle recently signed a letter denouncing the Georgia abortion bill H.B. 481, which restricts abortions after the detection of a fetal heartbeat. “Roe versus Wade has been decided. And to want to go and re-litigate that — and this bill is particularly draconian with what it wants to do with women, that it’s just very important that we speak up and show up,” he said.

Listen to the episode here: