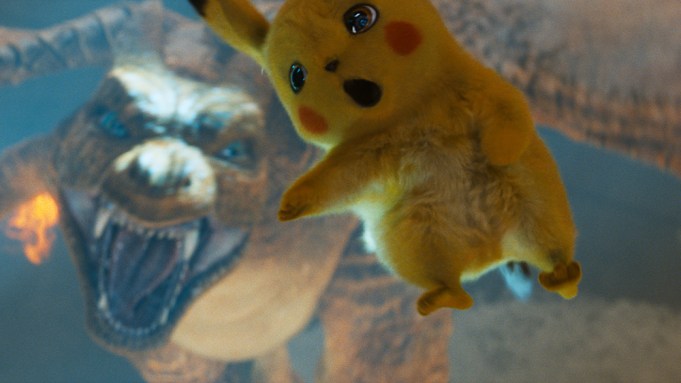 Warner Bros. and Legendary’s “Detective Pikachu” remained the top film at the international box office for the second weekend in a row, amassing $53.8 million from 72 foreign markets.

The Pokemon adaptation, featuring the voice of Ryan Reynolds, is nearing the $200 million mark overseas. It has currently earned $193.4 million abroad, taking its worldwide bounty to a strong $287.4 million.

“Detective Pikachu” had another solid outing in China, earning $17.2 million and bringing ticket sales in that territory to $70.3 million. Other top markets include Russia, where it opened with $4.3 million, as well as the United Kingdom with $3.5 million, Germany with $2.1 million, and Mexico with $2.25 million.

Falling not far behind was Disney and Marvel’s “Avengers: Endgame,” posting $46.8 million from 55 international territories. The superhero blockbuster has now generated $2.6 billion worldwide, ranking as the second-biggest film of all time behind only “Avatar” with $2.78 billion. With $1.88 billion overseas, it’s also the No. 2 highest-grossing movie ever internationally, also behind “Avatar” with $2 billion. “Endgame” continues to resonate in China, where it’s now the biggest Hollywood movie in history with $625 million. The tentpole also hit the $100 million mark in the U.K. and Korea.

Among new releases, Lionsgate’s “John Wick: Chapter 3 – Parabellum” bowed with $35 million from 66 international markets. The third installment in the Keanu Reeves-led action franchise lifted off with $57 million in North America, bringing its global tally to $92 million. Top performing territories include the U.K. ($4.6 million), Russia ($3.8 million), Australia ($2.8 million), and Mexico ($2.1 million). In “Parabellum,” Keanu Reeves returns as the titular ex-hitman who finds himself on the run from assassins.

Elsewhere, Warner Bros. and MGM’s YA romance drama “The Sun Is Also a Star” earned a paltry $484,000 when it opened in 25 international markets.