Daniel Radcliffe on Acting With Weapons Nailed to Your Hands 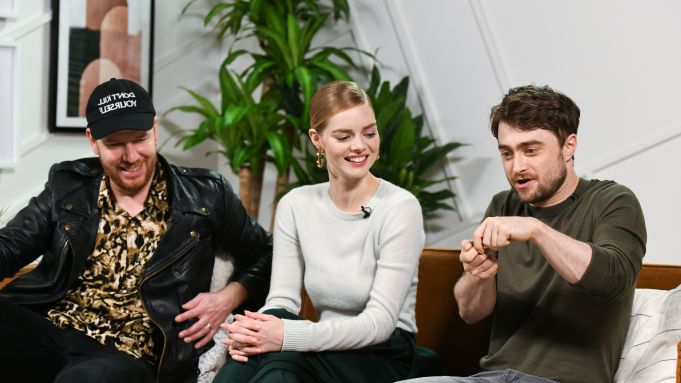 How did “Guns Akimbo” director and writer Jason Lei Howden convince Daniel Radcliffe to play a character with guns nailed to his hands? Easy, he sent him the script.

Radcliffe joined Howden and “Ready or Not’s” breakout star Samara Weaving in the Variety’s Toronto Film Festival studio, presented by AT&T to talk the limits of acting with weapons attached to your hands, snorting vitamin C and the worst parts of the internet.

“Guns Akimbo” takes place in a world where a nefarious underground internet movement, called “skism,” live casts random strangers fighting each other to the death. When the morbid streaming service turns its eye on Radcliffie’s mild-mannered, troll-hating desk jockey, Miles, things get even more violent. His character is kidnapped, knocked out and revived with guns literally bolted to his hands. Now stuck inside this real-life, video game hell, he must fight or die.

“I feel like it was such a fun and exciting script, it had this insane idea in the middle of it that was really fully explored,” Radcliffe said. “It’s not just a device for crazy fight scenes, having guns for hands. It’s also a device for a lot of physical comedy that I really enjoyed. ‘How do you dress yourself, how do you pick up your phone, how do you go through life,’ which Jason practiced very early on.”

“I got water pistols and taped them to my hands and I spent a day just going around my flat,[just asking] ‘how do I go to the toilet?,” Howden laughed.

But how did the creator balance the extreme violence of skism without going too far? “You approach it with a certain ‘Looney Tunes’ cartoony-ness.” Howden explained. “For me, that takes away from the blow a bit. No one wants to watch real-life violence. When the news comes on, I can’t watch that stuff. I can’t even watch those medical shows… You reach a point where it just goes so over-the-top where it’s not realistic.”

When asked which real life video games the cast and director enjoy, Weaving listed “Red Dead Redemption” as her favorite and Howden said he plays “Legend of Zelda” on his Nintendo switch. But Radcliffe revealed he doesn’t game anymore, “If I do it, it’s all I do and I don’t do anything else and I stay up all night, so I have to stop.”

But one online outlet Radcliffe does partake in is fantasy football. After the first week of the NFL, the boy who lived was ready to list off his sleeper payoffs and share thoughts on the retirement of former Colts quarterback Andrew Luck.

A self-professed fan, the actor has devised a plan on how he will befriend Luck, commission the ex-NFL member to construct a building of some sort (Luck graduated from a Stanford with a degree in architectural design). Both co-star Weaving and we agree, sounds like the start of an excellent film.