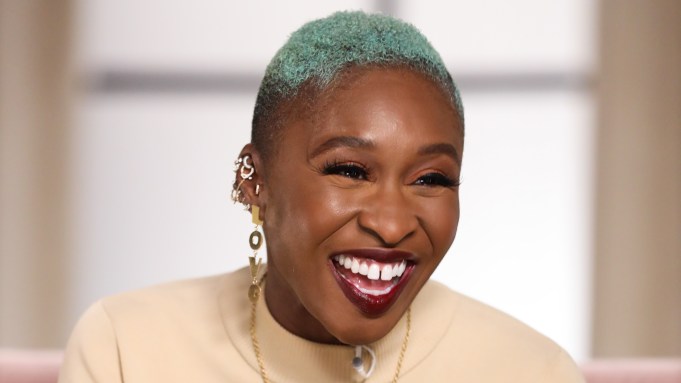 Before Cynthia Erivo went on to become a Tony and Grammy winner, she nearly gave up singing to be a spinal surgeon.

In her “Variety Studio: Actors on Actors” conversation with Alfre Woodard, the “Harriet” star said she had been singing since she was toddler. Her mother noticed she’d hum while eating her food when she was just 18 months old, and wrote down in her baby book that she’d go on to be a singer.

However, that natural talent was almost wasted when she was in high school.

“I had a real weird phase when I was about 16. I just stopped doing it for a second. I got shy,” Erivo said. “Everyone around me in my class, they wanted to be doctors, lawyers, nurses and I didn’t want that. I wanted to sing and act, but I felt weird because nobody else in my class would do it. I was in a class full of people who were brain boxes. I happened to be able to keep up with all those brain boxes, so I felt weird. I was just like ‘Okay, I’ll be a spinal surgeon. That’s what I’ll be.’ And I just decided I’ll do that. I realized a had a penchant for biology and I loved it and I was good at it so I was going to keep doing that.”

Luckily, one day, her mom noticed she hadn’t sung for a while, and gently nudged her to start back up again.

“She just goes, ‘Where’s your singing? Is there a concert or something we can go and listen to? Make sure you’re singing,'” Erivo recalled. “Didn’t say anything other than that. It hit me in the back of my head, like ‘Okay, I guess I can’t not do that.”

Woodard praised Erivo’s mother’s intervention: “If your baby had the voice of God coming out of them, you need to be in jail if you didn’t say, ‘Come on, honey, we’re going to the town square with this!”