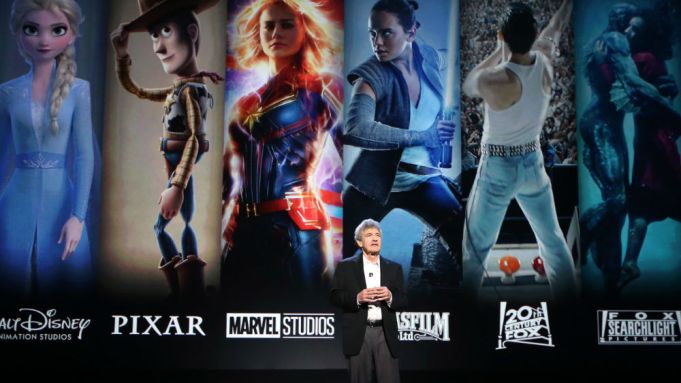 Not to be outdone by the avalanche of series orders and casting announcements bolstering the new streaming series Disney Plus, Walt Disney Studios showed off its film wares in a marathon presentation at D23 on Saturday.

The Anaheim, Calif. expo brought star power, if perhaps fewer surprises than Friday’s presentation, as fans in princess and villain cosplay lined the halls and clamored for glimpses at everyone from Angelina Jolie to Dwayne Johnson.

“We mean it when we say you’re not fans, you’re family,” said studio chief creative officer and co-chair Alan Horn, in introducing the lineup.

Here are some key takeaways:

Star Wars Comes in For a Landing

We’ve heard before that “Star Wars: The Rise of Skywalker,” would end the saga kicked off in 2015 by “The Force Awakens.” The former’s director J.J. Abrams, flanked by Lucasfilm president Kathleen Kennedy, went as far as to say it would complete the arc of franchise films put forth since the 1977 original.

It might sound like classic studio hype that serves to invoke nostalgia in a rabid fan base, but something about Abrams’ sentiment felt definitive — especially in light of the overall mega-deal he just signed at Warner Bros.

Kennedy promised fans the film would be “incredibly fun.” Abrams took a sentimental route, and said the film was a love letter to the late Carrie Fisher.

Marvel is a Star Magnet

After completing the historic Infinity Saga and bidding farewell to Robert Downey Jr., the Marvel Cinematic Universe is not short of stars to fill its many roles. Hotly rumored for a day prior, “Game of Thrones” star Kit Harington joined the cast of “The Eternals,” a relatively unknown Marvel property about aliens who have lived thousands of years on earth.

Harington will not star as one of the ancient creatures, which include Salma Hayek, Kumail Nanjiani, Lauren Ridloff, Brian Tyree Henry, Richard Madden and Jolie. He rounds out the cast with “Crazy Rich Asians” star Gemma Chan and indie actor Barry Keoghan.

Don’t count out the comic studio’s existing megastars. “Black Panther” director Ryan Coogler made an appearance at D23 (a bonus in a presentation similar to the one Marvel made in July at San Diego Comic-Con) to announce a sequel with Chadwick Boseman will hit theaters on May 6, 2020.

Controversy Does Not Deter Disney Fans

After a week of headlines over a creative divorce that will see Sony produce new Spider-Man films with star Tom Holland outside the purview of Marvel Studios chief Kevin Feige, the young British star got a hero’s welcome in the D23 main hall.

He made the remarks standing beside another MCU star, Chris Pratt of “Guardians of the Galaxy,” as both men will lend their voices to the upcoming Disney-Pixar animated feature “Onward.”

Similarly, Walt Disney Studios president of production Sean Bailey showed an extended sizzle from next year’s live-action adaptation of “Mulan.” The film has been mired in political strife between mainland China and Hong Kong, as has its star Crystal Liu. The footage, which included glimpses of battle and memorable moments from the animation like Mulan’s presentation to her village matchmaker, played big.

Liu did not turn up at the event, but a swift and polite conversation was had with the film’s director Niki Caro.

While the Friday audience at the Disney Plus presentation was treated to a trailer for the live-action “Lady and the Tramp,” where the film will exclusively debut, WDS brought a similar property with a rebellious flair.

Emma Stone’s “Cruella,” the back story behind the stylish villain of “101 Dalmatians,” has a surprisingly edgy twist: it is set in the 1970s punk scene in London. Stone rocked a wild curly wig in Cruella’s signature black-and-white tones, wielding dogs on chains with her goons lingering in the background. Check it out here.

One of the founding attractions at Disneyland was the Jungle Cruise. It’s a riverboat excursion that lets guests face off against pirates, wild animals and the elements in a quest for thrilling adventures.

It’s also a big gamble for WDS, which is entrusting America’s sweethearts Dwayne Johnson and Emily Blunt in shepherding an adaptation of the ride as a narrative film. She’s a spry and bold academic looking to assemble a magic weapon. He’s a swashbuckling boat captain trying to pay off debts to a mustache-twirling benefactor (Paul Giamatti). Their paths cross and sparks fly.

Johnson seemed to set — and then meet — expectations in the same breath, speaking after showing a trailer surrounding his character. The “Hobbs & Shaw” star referenced Walt Disney himself, saying at his first-ever park, “he had one baby. That baby was Jungle Cruise. He was the first skipper.” The star promised he and Blunt wouldn’t let Walt down, and deliver a film akin to “Romancing the Stone,” featuring “heroic men kicking ass and saving the girl.”

Blunt had the last word, and showed a second trailer built around her own character.

The Simpsons Join the Family — On the Big Screen?

One of the content gems Disney assumed control of in its acquisition of 20th Century Fox this year was Matt Groening’s iconic TV series “The Simpsons.” In a breakout conversation running parallel to the Disney Studio presentation, creatives let it slip that the Springfield family will likely head back to the big screen for a sequel to their 2007 feature debut. Likewise, a spinoff show is being discussed for Disney Plus.

Will Thorne contributed to this report.