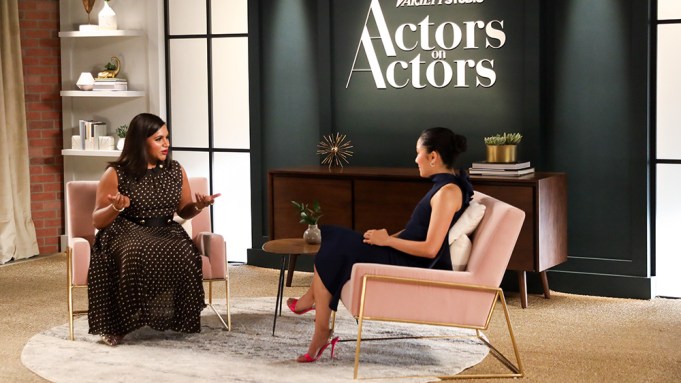 Constance Wu (“Hustlers”) and Mindy Kaling (“Late Night”) discussed the importance of women directors during a conversation for “Variety Studio: Actors on Actors.”

Kaling began the interview by acknowledging how having female directors on “Hustlers” and “Late Night” benefited the films.

“[‘Hustlers’ director Lorene Scafaria] doesn’t come from a place of, ‘Oh, let’s humanize this woman,'” Wu said. “She already understands that this is how she’s going to frame her story within the context of something that you would think would have the male gaze because it’s about women who work in strip clubs.”

“I remember thinking nothing felt exploitative,” Kaling said. “As [a] woman, I love seeing beautiful women dance, but the way that [‘Hustlers’] was shot, there was nothing prurient, which I thought was really refreshing.”

“On a producer standpoint, I feel like I can’t come to these things and talk about how important it is that we have representation and then hire some white dude to direct my movie,” Kaling continued. “So ‘Late Night’ stars two women who are ambitious, professionally, and I just felt like having a female director would make sure the movie didn’t position ambition as a negative quality.”

Wu then told Kaling about an experience on a different set: “I was working on a project and it was a scene where a guy did something bad to me and I’m angry at him. The director kept trying to be like, ‘Can you just soften it a little bit?’ I trust the director, he wants his movie to be good, so I did. I made it gentler. One of the producers, who was a woman, came out and she was like, ‘No. As a woman, I’m annoyed that she’s playing this soft, sweet … let her have some teeth.’ It felt more free, it felt more human.”

“That’s what’s so nice about ‘Hustlers,'” Kaling said. “In this movie, I know that you’re committing crimes, but I want all of you to be set free.”

“Yeah, because we’re people,” Wu said. “We’re not ideas and you know that people are flawed and might make mistakes, but they’re trying their best in a system that hasn’t cared that much for them.”

Variety’s “Actors on Actors” issue is on newsstands now. The Emmy-nominated companion series will air on PBS stations and the World Channel starting in January. Check back for more from Kaling, Wu and the other best actors from this year’s film season.