Comic-Con: 4500 Gallons of Fake Blood and Everything Else to Know About ‘It Chapter Two’ 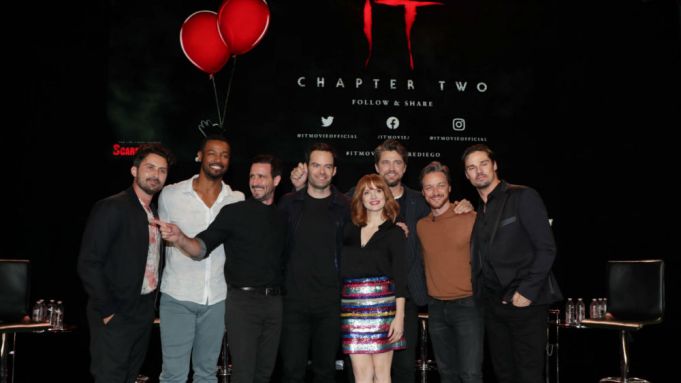 Comic-Con 2019 kicked off with a stacked presentation from the director and cast of “It Chapter Two” on Wednesday, inspiring a curious amount of joy at San Diego’s Spreckels Theater in spite of the abject terror offered up by the film.

The closing chapter to 2017’s record-obliterating “It,” the highest grossing R-rated horror film of all time, brought out director Andy Muschietti and stars Jessica Chastain, James McAvoy, Bill Hader and Isaiah Mustafa among others for a panel and footage presentation moderated by Conan O’Brien.

O’Brien said he was a good match to host the evening, as both he and Bill Skarsgard (who portrays the terrifying clown Pennywise) are “both pale and frighten children.”

Warner Bros. Entertainment owns and operates specialty label New Line, and given the main studio’s absence from Comic-Con this year (despite a deep bench of superhero fare to trot out), you couldn’t help but feel they were overcompensating with a wealth of visuals for fans.

Muschietti showed three lengthy clips and a full trailer (the latter drops on Thursday morning), swearing everyone to secrecy. The stars of “Chapter Two” play adult versions of the children cast in the first film, and the unquestionable gem of the clips the studio brought was a Chinese restaurant scene where the characters reunite as grownups. To spoil nothing at all — Chastain is every inch the movie star, McAvoy the emotional heavyweight and Hader gets all the laughs.

Here are some takeaways from the conversation about “It Chapter Two”:

Chastain and Muschietti said at the top of the panel that the movie has broken a world record for the amount of fake blood it uses — “4,500 gallons,” said Chastain. Variety has asked the studio for verification, but you get the point.

“I’m a glutton for punishment,” Chastain admitted, revealing she spends a good portion of the third act completely drenched in blood. Muschietti tried to find a workaround where it would only be visible up to her collarbone, but she waned the full monty.

“Everyone else was comfortable between takes, while I sat in a baby pool of blood,” she said. McAvoy explained that the liquid substance was made with sugar, and couldn’t be heated up or else it would ferment and smell of “puke,” he said. So therefore Chastain applied it freezing cold. She was compelled by her love of the movie “Carrie.”

The actors did mark the changing of the guard.

Muschietti had the young cast, including “Stranger Things’ actor Finn Wolfhard and “Sharp Objects” star Sophia Lillis, pen letters to their adult counterparts as a passing of the torch.

What was uncomfortable, Hader said in a hilarious anecdote, is that the letters came with framed photos of the kids.

“We all immediately had the same thought, I’m not going to put out of a photo of a young boy!” Hader said to laughs. “Also, we were on location, and I didn’t have any other photos, so if someone comes over it’s like?”

Andy Bean, who plays adult Stanley in the film, said his child actor had some different feedback when they met.

Skarsgard was no longer sequestered.

In the first film, Muschietti kept Skarsgard-as-Pennywise hidden from his child actors as much as possible for optimal effect in the moment. That was not the case here. Skarsgard was given free rein to terrorize his costars in between takes, and fool around with them in general.

Hader told a story about video chatting with his daughters, 9 and 6, and Skarsgard crept into the frame while in costume. McAvoy developed tendonitis in one of his knees that lasted for six months, while running away from Skarsgard in and out of takes. Chastain said she was mortified when she jump-screamed in front of a pack of Warner Bros. executives when Skarsgard simply leaned over and said “boo” when she wasn’t paying attention.

See Skarsgard’s full reign of terror when “It Chapter Two” opens on Sept. 6.