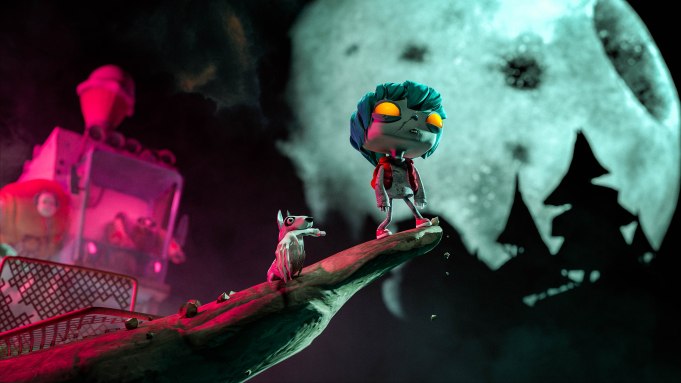 Colin Farrell (“The Lobster”) is stepping into virtual reality with “Gloomy Eyes,” a three-part animated VR series whose first episode will premiere in the New Frontier section at the Sundance Film Festival.

Farrell has come on board to narrate all three episodes of “Gloomy Eyes,” which tells the story of a young human girl and a zombie boy whose love transcends the boundaries in a world where zombies are considered outlaws.

“Gloomy Eyes” is co-directed by Jorge Tereso and Fernando Maldonado, the duo behind the 2012 animated short “Shave It.” It’s produced by France’s Atlas V and 3dar, and co-produced by Ryot, Arte and HTC Vive, with the support of the CNC, Unity and Rhones Alpes.

“Anything that invokes a sense of magic and total immersion is worth gold, and it was amazing to be a part of the vision Fernando and Jorge created in Gloomy Eyes,” Farrell said. “It’s a completely transportive and beautiful experience, unlike anything I’ve ever seen before, and really connected with my passion of storytelling.”

Tereso and Maldonado told Variety that “Gloomy Eyes” had a contemporary resonance. “We live in a contradictory dark world and we love it anyways. Walls are coming up every day and there’s a lot of rejection of what’s different. When there’s a lot of darkness around it’s easier to find the light,” said the directors.

“The world we imagined in ‘Gloomy Eyes’ shows the darkest side of humanity. But we balance it with the hope that two little kids bring in their eyes. To love what’s different will bring harmony once again,” the pair added.

Antoine Cayrol, the co-founder of Altas V, said his Paris-based company was primarily interested in collaborating with talents who surprise audiences and take them off the beaten path. “Each project is very singular. We always strive to have A-list talent attached, top-level production values and a story which will appeal to broad audiences,” said Cayrol, whose goal is to reach audiences beyond the usual VR viewership.

He said Farrell had recorded the voice-over of the first episode in Los Angeles, and was fully committed to it. “He knew all the material thoroughly. We were all very impressed by his dedication,” Cayrol said.

Launched in late 2017, Atlas V attended Sundance last year with an episode of “Spheres,” an interactive journey inspired by the iconic “Pale Blue Dot” image of Earth. “Spheres” was narrated by Jessica Chastain and other stars, and executive produced by Darren Aronofsky and Ari Handel at Protozoa. “Spheres” was bought at Sundance by CityLights in the first known seven-figure deal for a VR experience at a festival.