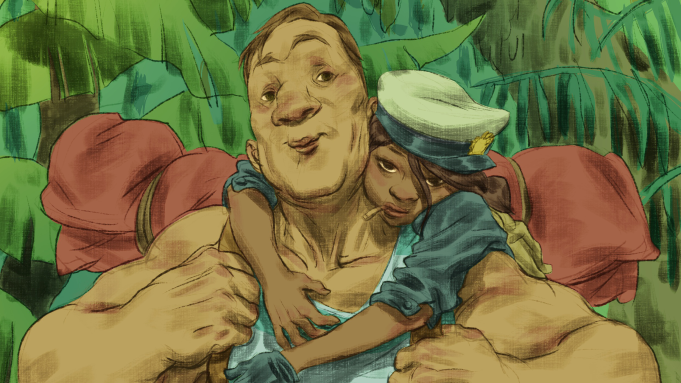 Italian animation auteur Alessandro Rak, best known for Neapolitan mob fable “Cinderella The Cat” which launched from Venice in 2017 and competed at Annecy in 2018, is in production on “The Walking Liberty,” a tale partly inspired by the optimistic spirit reflected in the eponymous silver half dollar issued by the Unites States Mint from 1916 to 1947.

As seen in this exclusive trailer/mood clip given to Variety, Rak’s new feature – which he has been working on for over a year – is set in a post-apocalyptic world where the jungle has covered up almost everything but not a movie screen playing Charlie Chaplin’s “The Great Dictator.”

The film takes its cue from “the politically destructive populist movements that we are seeing cropping up all over Europe,” Rak said. It is told “through the eyes” of two characters, a 15-year-old girl named Yaya, who has elements of the sailor protagonist of Hugo Pratt’s “Corto Maltese,” albeit in a female incarnation, and a tall mentally impaired giant called Lennie who is twice her age.

“They are both innocents with no parents,” said Rak who specified that the narrative never clarifies what the origins of the disruption are.

“The idea is to tell the story of two people who are born in a new world and don’t have a direct connection to history,” he said.

As for the choice of “The Walking Liberty” as the film’s title, Rak said what he liked “is the word liberty” and the fact that the eponymous silver half-dollar “made history for various reasons including that it became the coin of choice to perform magic tricks.”

Also that the title brings to mind “The Walking Dead,” he added. But that while that show is “about an apocalyptic future that is horrible” we like the idea of one “that is tied to the idea of future freedom,” Rak noted.

“The Walking Liberty” is being produced by Rak’s regular shingle, Naples-set Mad Entertainment with some funding from the Italian Culture Ministry. Mad is in advanced talks for a French producer to come on board as well as a sales agent. The delivery date is still uncertain.