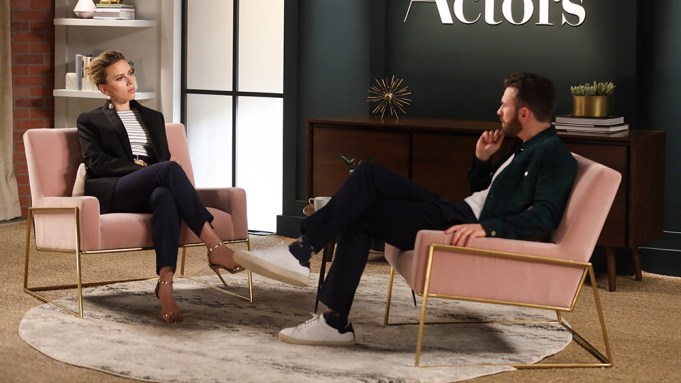 Chris Evans and Scarlett Johansson discussed why Marvel films have come under attack.

Evans (who plays Captain America in the Marvel Cinematic Universe) and Johansson (Black Widow) recently sat down for Variety‘s Actors on Actors issue, on stands on Nov. 12.

Although they didn’t mention Martin Scorsese by name, they alluded to the “Irishman” director’s recent argument that Marvel films shouldn’t be considered works of cinema.

“It’s interesting,” Johansson says, “because a couple of people in the past couple of days have mentioned to me that a couple of extremely esteemed directors have been really vocal about how the whole Marvel universe and big blockbusters are really like ‘despicable’ and ‘the death of cinema.’ At first I thought that seems kind of old-fashioned, and somebody had to explain to me, because it seemed so disappointing and sad in a way. They said, ‘I think what these people are saying is that at the actual theater, there’s not a lot of room for different kinds of movies, or smaller movies, because the theater is taken up by huge blockbusters.’”

“It made me think,” Johansson continues, “about how people consume content now, and how there’s been this huge sea change with their viewing experience.”

Evans responds: “I think original content inspires creative content. I think new stuff is what keeps the creative wheel rolling. I just believe there’s room at the table for all of it. It’s like saying a certain type of music isn’t music. Who are you to say that?”

Evans and Johansson starred together in last spring’s “Avengers: Endgame,” which has become the highest-grossing movie of all time.

“We’ve been trying to organize this ‘Avengers’ vacation,” Evans says. “We deserve a little victory lap. It’s not just wonderful because you get to be a part of a pop culture phenomenon, the same way ‘Star Wars’ impacted me. But I think what really will stay with me is the fact that the people we got to work with, truly there is not a bad apple in the bunch.”

Johansson is in the awards conversation this year for dual performances in Noah Baumbach’s “Marriage Story” and Taika Waititi’s “Jojo Rabbit.” Evans can next be seen in “Knives Out,” a murder mystery directed by Rian Johnson.