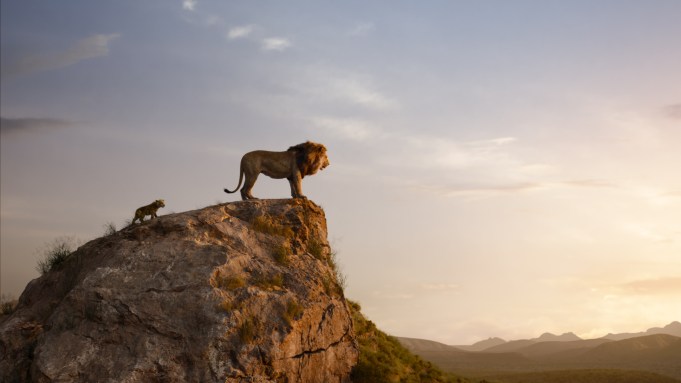 Disney’s “The Lion King” has pounced on the China market — a week ahead of its U.S. release — with a $53.8 million three-day debut that gave it pride of place at the Chinese weekend box office. But the win came against a field of competitors so dismal that the fourth top-performing title hasn’t even had its official premier yet, and amid a drop of nearly 5% in the country’s total year-to-date box office compared to last year.

The downward slide in theatrical earnings is part of an increasingly sluggish overall economy, with official data revealing Monday that Chinese economic growth slowed to its weakest pace in nearly three decades in Q2. Chinese GDP expanded by just 6.2 %, down from 6.4% in Q1 and from 6.6% in 2018.

That means that, in 72 hours, “The Lion King” has already out-earned Disney’s other two live-action remakes released in China this year, pushing past “Aladdin’s” $53.5 million in May and “Dumbo’s” $21.9 million in March. Maoyan forecasts that the Jon Favreau-directed film will go on to earn $166 million (RMB1.14 billion) over the course of its China run. This would make it Disney’s most successful live-action title in the territory.

The original movie was the first animated film to receive a wide release in China, and the country’s first imported animated title, when it hit theaters there in 1995. Given the nascent state of the Chinese box office at that time, it made just $5 million. While perhaps less familiar to viewers in China than elsewhere, the property still is nostalgic for many Chinese moviegoers, especially those born in the 1980s and 1990s, for many of whom it was the first film they saw in theaters.

“The theater was full of 30-something adults acting like kids,” one user wrote on the Douban review platform, where the film is currently rated just 7.5 out of 10. Scores are a bit higher on the more populist Maoyan and Tao Piaopiao platforms, where it has earned 8.9 and 8.8 out of 10, respectively.

“The Lion King” has hit theaters at a time when local Chinese titles have all but dried up, with the lineup over the past month essentially decimated by Chinese censors on the lookout for content that could be considered problematic ahead of the country’s celebration of the 70th anniversary of the founding of the People’s Republic. China’s year-to-date box office is $4.87 billion, down 4.9% from the $5.12 billion it was at this point last year.

Sony’s “Spider-Man: Far From Home” netted $9.5 million to come in third in its third weekend in theaters, and has now grossed $192 million overall.

Curiously, in fourth place was a local astronaut-themed drama about fatherhood, “Looking Up,” which has earned $5.6 million in pre-screenings ahead of its July 18 debut. In hopes of becoming this summer’s realist drama breakout title in the vein of last year’s “Dying to Survive,” the film’s team has gone on a multi-city promotional tour around the country to generate good word of mouth, releasing promo clips of audiences laughing and weeping as they watch. Some 76,000 people have already rated the film on the Maoyan platform, giving it 9.4 out of 10.

It is co-directed by Yu Baimei and actor Deng Chao (Zhang Yimou’s “Shadow,” “The Mermaid”), and also stars the latter.  The two last collaborated on directing the 2015 romantic comedy “Devil and Angel,” which grossed $94.3 million.

In fifth place was Japanese animated title “Fate/Stay Night Heaven’s Feel,” which grossed a mere $3.2 million. It nonetheless outperformed Illumination’s “The Secret Life of Pets 2,” which brought in only $2.4 million in just its second weekend in theaters.