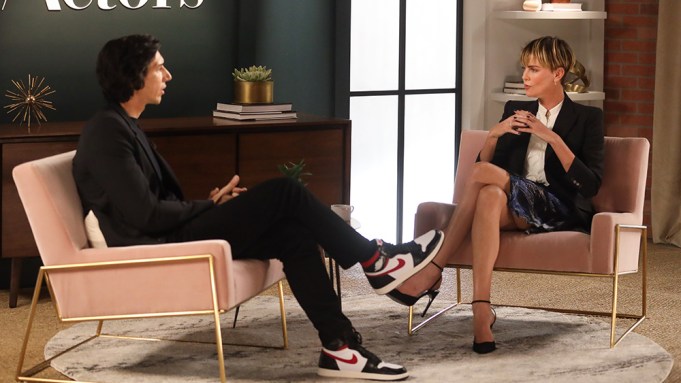 Charlize Theron (“Bombshell”) said she relates to Megyn Kelly because they’ve both been called bitches.

Theron discussed her similarities with Kelly and building a career on portraying unlikable women during a conversation with Adam Driver (“Marriage Story”) for “Variety Studio: Actors on Actors.”

Driver initiated the interview asking whether Theron considered the likability factor in her role for “Bombshell.”

“I built a career on playing people you don’t like,” Theron laughed. “I remember so vividly working with George Miller on ‘Mad Max: Fury Road.’ There was this concept of a woman saving five young women. That, on its own, I was like, ‘No, who wants to play the woman who’s saving all the other women?’ There has to be some human experience there that is faulty, self-serving, angry, aggressive, that it’s not all the right reasons. You don’t always do things for the right reasons.”

Her more recent portrayals, such as Kelly in “Bombshell,” have been more extreme.

“Megyn Kelly, of course, can be incredibly polarizing,” she said. “People either love her or they hate her. She makes no excuses for that.  Those are the rules that are handed to me. I have to obey by those rules. I would be lying if I didn’t say I can relate to being a woman, on a different degree, experiencing those same thoughts about me. I’ve heard people describe me as cold, or hard, or a bitch.”

Variety‘s Actors on Actors issue is on newsstands now. The Emmy-nominated companion series will air on PBS stations and the World Channel starting in January. Check back for more from Theron, Driver and the other best actors from this year’s film season.