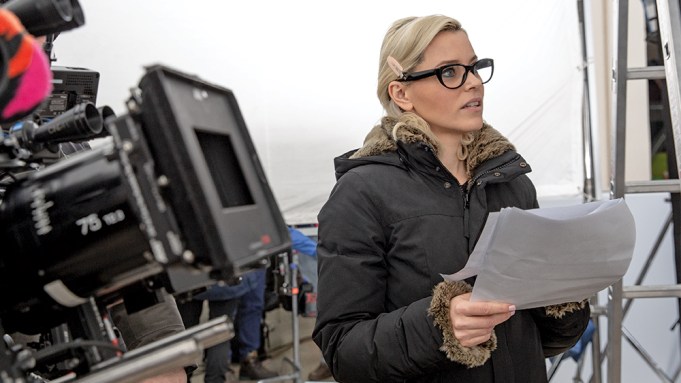 When it comes to female empowerment, “Charlie’s Angels” has always been a franchise ahead of its time, bringing a group of butt-kicking women to the screen in the 1970s. But Elizabeth Banks’ version of the trio of crime-fighting women is the first time the story will be told by a woman.

Banks directed the reboot of “Charlie’s Angels,” out in theaters this weekend, in addition to writing the screenplay and serving as a producer. She also stars as Bosley, alongside the modern-day angels, played by a more diverse bunch in Kristen Stewart, newcomer Ella Balinska and Naomi Scott (“Aladdin,” “Power Rangers”).

“We all talk about the male gaze a lot versus something that feels a little bit more embedded and inside the perspective of women,” Stewart told Variety.

Th new “Charlie’s Angels” is full of girl power, Stewart promises, but it’s not trying to shove it down your throat.

“It’s really nice to see how unintentional the motives are,” Stewart said. “It’s not like, ‘We need to empower women!’ No, it’s actually a story told by an empowered woman, so it’s just sort of imbued with that feeling.”

“It’s always a good time to have a female-fronted action franchise out there. It’s never a bad time for that,” Banks said. “I wanted people to leave just feeling super hopeful about the shitty world we’re living in,” she added with a laugh.

Stewart has worked with female directors on indie films, and Catherine Hardwicke directed the first “Twilight” movie, but the actress recognized it’s out of the norm for a woman to direct a big studio film. She said she noticed where Banks had to work harder than her male counterparts.

“I’ve never made a big movie where the boss was allowed to be a girl. It was weird, and it was so cool,” Stewart said. “I could see the way that she had to traverse this world a little differently in order to be heard. I could see where there were times where naturally, it’s harder to hear a woman be assertive. She had to really understand communication, and she’s really good at that…I have to say though, it is remarkable. On a smaller move? Sure. But on a big-budget huge movie that really aspires to be a franchise, not normal. So that fact that she kick-started this and made it happen and everyone trusted her, including the studio, it’s wild. It’s really special.”

Banks noted that female-fronted movies are held to a different standard at the box office, and said she hopes “Charlie’s Angels” emboldens studios to take chances on women behind the camera.

“The main thing I want it to convince executives that they can trust women,” Banks said. “If I deliver a good movie with this amazing cast, we made something really fun that people really want to see, I just hope I convince more executives to trust us — just trust women with the job.”