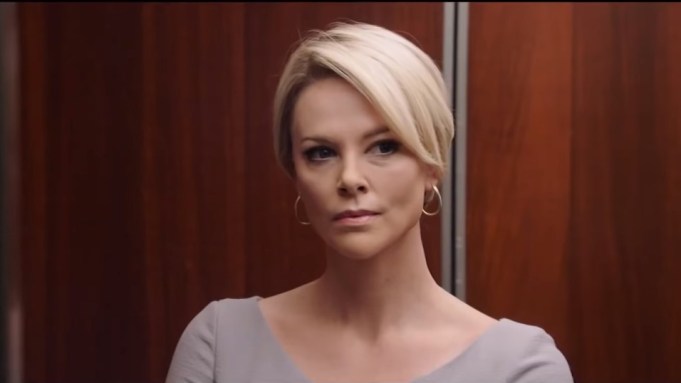 Theron discussed the transformation — and much more — with Adam Driver (“Marriage Story”) during a conversation for “Variety Studio: Actors on Actors.”

The interview began with Driver asking Theron if she could recall when she gained ownership over her Megyn Kelly character.

“You know this stuff doesn’t happen overnight, it’s a process, especially when you’re working with prosthetics and trying to figure out how far you can go before it’s distracting for people or before you can’t even use your face anymore,” Theron said. “I begged [Kazuhiro Tsuji, special makeup effects artist] to come on because he’s just so good and I knew that he a) would be really good at doing it but b) he would be a really good gauge in looking to someone else and saying, ‘how do we find that balance?'”

“We did the first test and I looked like a young Glenn Close,” Theron continued. “I remember Jay [Roach, director] in the background and I could see panic coming out of him, like ‘This is never going to work.’ And Kazu, who’s this gentle Japanese genius, was kind of, like, deep[ly] humming while staring at my face.”

“Yeah, like, artists, humming,” Theron said, humming somberly. “He said, ‘Don’t worry, we’re going to figure this out.’ I met with him three weeks later and he had changed the prosthetics to work differently on my face. It was the second time I sat down with him that I realized this was maybe going to work. But he was so good at what he did that I kept going, ‘Oh, now I have to bring that same level of what he’s giving me. In many ways, when you work with people who are that good, they push you to have to be better.”

Variety‘s Actors on Actors issue is on newsstands now. The Emmy-nominated companion series will air on PBS stations and the World Channel starting in January. Check back for more from Theron, Driver and the other best actors from this year’s film season.