‘Captain Marvel’ Reviews: What the Critics Are Saying 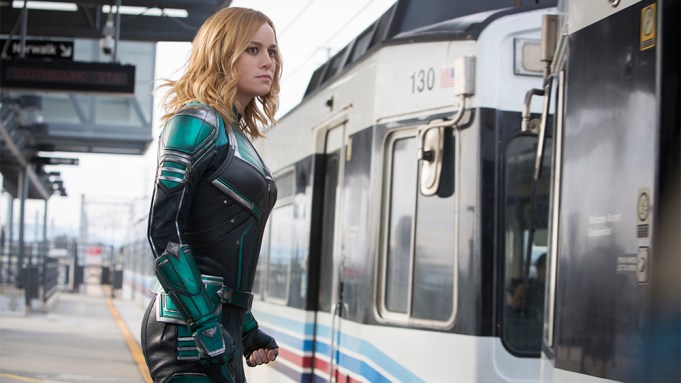 “Captain Marvel” reviews are finally in, and critics seem to be enjoying the adventures of Brie Larson’s Carol Danvers.

Reviews tend to say the same thing: it’s good entertainment, but falls short of recent Marvel titles. The film delivers a political message, but not to the degree of the firebrand subversiveness of “Black Panther.” And it’s an origin story that nicely elaborates on the Marvel mythology, but not to the scale of the epic “Avengers: Infinity War.”

The latest Marvel installment, directed by Anna Boden and Ryan Fleck, currently carried an 83% on Rotten Tomatoes, which is in line with previous entries in the franchise. The film lands right between “Thor” (77%) and “Black Panther” (97%). Critics almost unanimously lauded the performances of the impressive ensemble cast, consisting of Larson, Samuel L. Jackson, Annette Bening, Ben Mendelsohn, and Jude Law.

“Captain Marvel” flies into theaters on March 8, and is expected to bring in between $115 million and $125 million in its opening weekend. See what the critics are saying below:

“In ‘Captain Marvel,’ Brie Larson radiates an ability that too many comic-book heroes never get the chance to show: the superpower of expression. She plays a Kree warrior, known as Vers (pronounced veers), who has been trained in the familiar comic-book-movie art of kicking cosmic butt (she specializes in leaping and flying martial-arts moves and the ability to deliver high-energy photon blasts). Yet what you can’t help but notice, apart from the slithery bravura of her combat skills, is the feeling she brings to the fight. ‘Captain Marvel’ is only the second major Hollywood movie to feature a female superhero at its center, but it’s a savvier and more high-flying fantasy than ‘Wonder Woman,’ because it’s the origin story as head game. Larson’s Vers is like someone trapped in a matrix — she has to shake off the dream of who she is to locate the superwoman she could be. And that makes for a rouser of a journey.”

“Larson does get a few opportunities in ‘Captain Marvel’ to be that regular, flawed-but-strong human — there just aren’t enough of them, and they’re hardly the focus of the movie. Of course, in the broader context of the Marvel Cinematic Universe, this is all just a setup for Captain Marvel’s role in the upcoming ‘Avengers: Endgame.’ But by the time I got to the end of ‘Captain Marvel’ — after watching Larson bash her way through phalanxes of wrinkled green aliens with her glowing fists, offer bathroom-mirror Post It-note words of encouragement to a little girl who beams at her adoringly, and hover in the air like Stan Lee’s version of the Blessed Virgin shimmering in the grotto before the future Saint Bernadette — I wasn’t thinking, Wow! Instead, I heard the voice of my own inner superhero, Peggy Lee, whispering in my ear: Is that all there is? The most heinous supervillain of all is Boredom.”

“Filmmakers like Boden and Fleck, Ryan Coogler and Taika Waititi can put their own spin on a given story or hero, but at some point bolts or waves of orange or blue light will come shooting out of someone’s hands and someone else will be thrown backward and bounce off a wall. The protagonist’s costume will become a character in its own right. That protagonist — a tough and charming woman, in this case, determined to fight gender clichés at least to a draw — will be ready for a career of franchise clock-punching, along with the rest of us. You will stay through the very last credits in the hope of collecting every last Easter egg, and you’ll shuffle out of the theater feeling both satisfied and empty.”

“In recent years, the ever-expanding Marvel Cinematic Universe has seemed to keep finding exciting new territory to explore. As the long-running, multiheaded collection of superhero franchises rolled on, it exhibited inventive comedy in ‘Thor: Ragnarok’ and ‘Ant-Man and the Wasp,’ staggering scale in ‘Avengers: Infinity War,’ and a genuine cultural-paradigm shift with ‘Black Panther.’ With ‘Captain Marvel,’ sadly, that streak is over. The 21st entry in Marvel’s galactic film empire, and the first focused on a female superhero (played by Brie Larson), is a perfectly fun time at the movies that deftly lays out the stakes of its new character for many future appearances. But more often than not, it feels a little routine.”

“This isn’t the greatest Marvel movie ever made, but it’s definitely one of the funniest — and one of the sweetest. Larson and Jackson have terrific buddy-movie chemistry, whether they’re giving each other grief or covering each other’s behinds. Amidst all the scenes with intergalactic warships and fireball-flinging, co-directors Anna Boden and Ryan Fleck wisely find plenty of room to take the foot off the accelerator and cede center stage to Larson, Jackson and the rest of the greatly talented cast. It’s a real treat to see Carol Danvers find her footing and her wings, so to speak, while at the same time Nick Fury is taking the first steps toward becoming NICK FURY.”

“A riot-grrrl power pulses through every frame, not to mention humor, heart and the thrill that comes from watching a genuine game-changer. ‘Wonder Woman,’ the 2017 epic from DC Comics, may have thrown the first punch for comic-book-movie equality among the sexes. But ‘Captain Marvel’ should have its detractors on the ropes. Set in the mid-1990’s and feeling like it was made in a time before Iron Man and the other Avengers ever suited up for the big screen, this superhero film proudly waves a retro flag. But everything in its DNA, from representation (in front of and behind the screen) to its notions of empowerment, radiates our moment right now.”

“This is an engaging and sometimes engagingly odd superhero action movie from directors and co-writers Anna Boden and Ryan Fleck, a weirdly nonlinear mashup of past and present, memories and present experience, Earth and non-Earth action. It’s an unconventional origin-myth story, which makes it initially uncertain what the nature of those origins is, and maybe even whose origins exactly we’re talking about. There’s an eccentric splurge of tonal registers from boomingly serious to quirkily droll. The film hinges on a fierce performance from Brie Larson, though I think it could have showcased her in a stronger, clearer starring role and assigned her more of the script’s funny lines.”

“The MCU’s newest hero, Captain Marvel, has entered the fray literally swinging, with a cosmic-flavored origin story that feels like a much-needed fresh approach to the classic Marvel Phase One formula. With a soundtrack packed full of vintage ‘90s earworms and a delightfully unselfconscious sense of humor, Captain Marvel pulls off a satisfying introduction to the hero who may be our ‘Avengers: Endgame’ trump card.”

“Ultimately, ‘Captain Marvel’ gets its many jobs done, and it looks pretty good doing it. As a first-shot representation movie, it isn’t as game-changing as ‘Black Panther,’ and it isn’t as adventurous as ‘Thor: Ragnarok.’ But it does deliver the girl-power narrative the MCU needed on a level to rival ‘Wonder Woman,’ and not just by making Captain Marvel a powerful hero. It also makes her an admirable person, one with good friends and goals worth fighting for. And it firmly establishes Carol Danvers as one of Marvel’s mightiest superheroes, which is exactly what the Avengers will need in ‘Endgame.'”