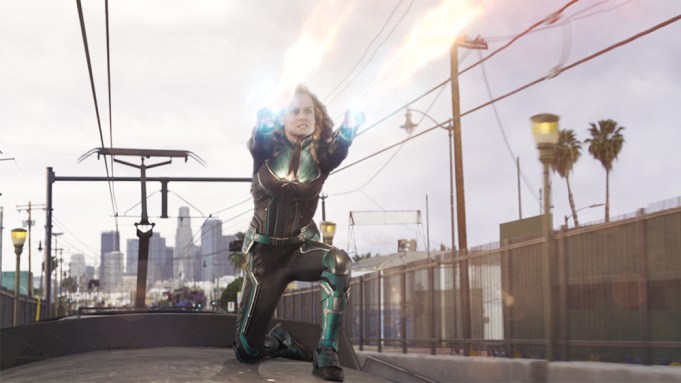 Brie Larson’s “Captain Marvel” is living up to its name, earning $20.7 million from Thursday night previews in North America.

It’s the 18th-highest preview number of all time and the fifth-biggest for a Marvel title, behind only the second and third “Avengers,” “Black Panther,” and “Captain America: Civil War.”

The Disney-Marvel tentpole, which expands to 4,310 sites on Friday, is expected to take in at least $125 million this weekend, with some forecasts in the $150 million range. “Captain Marvel” — the 21st title in the Marvel Cinematic Universe and the first to center on a female superhero — should post the best start for a standalone superhero film since Marvel’s “Black Panther” launched with $202 million in 2018.

“Captain Marvel” will also ignite the international box office this weekend when it opens in all major territories except Japan. The film scored an impressive $30 million on its opening day in China.

“Captain Marvel” has scored solidly with critics, achieving an 81% rating on Rotten Tomatoes with plenty of praise for Larson. Variety critic Owen Gleiberman wrote, “In ‘Captain Marvel,’ Brie Larson radiates an ability that too many comic-book heroes never get the chance to show: the superpower of expression.”

The movie has also emerged as something of a box office savior. The year-to-date North American box office has slumped by 27% to $1.57 billion through March 6. The 2018 total was $581 million ahead at the same point, thanks largely to the blockbuster performance of “Black Panther.” This will be the first weekend of the year to beat the same frame from a year ago, noted Paul Dergarabedian, senior media analyst with Comscore.

“She’s here and not a moment too soon as ‘Captain Marvel’ will show that one of her superpowers is the ability to bring the box office back to life, and turn the tide on a formidable year-to-date deficit to jumpstart a rather sleepy 2019 thus far at the multiplex,” he said.