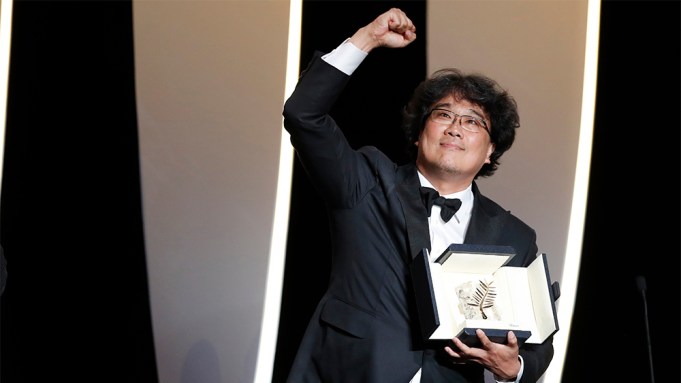 CANNES — The 72nd edition of the Cannes Film Festival wrapped with jury president Alejandro González Iñárritu announcing the group’s unanimous decision to award the Palme d’Or to South Korean director Bong Joon-ho for his sly, politically charged “Parasite.” Following last year’s win for humanistic Japanese drama “Shoplifters,” the well-reviewed Asian thriller represents the yin to that film’s yang: the story of a lower-class family who try to improve their social situation by infiltrating a rich household.

Explaining the group’s collective enthusiasm for “Parasite” at the post-ceremony press conference, Iñárritu said, “We all shared the mystery of the unexpected way this film took us through different genres and spoke in a funny, humorous, tender way — with no judgment — of something so relevant and urgent, so global in such a local film, with such a beautiful efficiency of media, and an understanding of what film really is. We were all fascinated when we saw it, and it kept growing and growing: that’s why it was a unanimous decision.”

French-Senegalese filmmaker Mati Diop earned the Grand Prix for her debut feature, “Atlantics.” Diop, who made history as the first black female filmmaker in competition, dramatizes a seldom-seen side of Europe’s refugee crisis through the eyes of a woman abandoned by the man she loves, when he decides to attempt an illegal crossing.

Calling Diop’s film “a beautiful fable,” juror Elle Fanning said, “Though it deals with these issues, it also felt personal and vulnerable, very emotional and just quite precious.” The 21-year-old actress — “a millennial surrounded by old people,” quipped Iñárritu — described her Cannes experience as one that has made her “view cinema differently, and for the good.”

Best actress went to British rising star Emily Beecham for Jessica Hausner’s “Little Joe.” In the critically divisive sci-fi film, she plays a scientist who begins to suspect that the plant she has genetically modified may have adverse side effects.

Accepting the trophy for best actor, Antonio Banderas reflected on his 40-year path to such recognition, awarded for his leading turn in Pedro Almodóvar’s semi-autobiographical “Pain and Glory.” Dedicating the award to Almodóvar, Banderas said, “People think we live in a red carpet, but it’s not true. We suffer a lot, we sacrifice, and there is a lot of pain behind an actor of any kind. But there is also glory, and this is my night of glory,” before promising, “The best is still to come.”

Cannes favorites Jean-Pierre and Luc Dardenne — who have won the Palme d’Or twice before, as well as two other awards — took the best director prize for “Young Ahmed,” the portrait of a Muslim teenager living in modern Belgium who attempts to kill his teacher after being brainwashed by a radical imam.

French writer-director Céline Sciamma earned the screenplay award for “Portrait of a Lady on Fire,” a lesbian-themed period film that explores the notion of the female gaze, both now and throughout the tradition of Western art.

Elia Suleiman’s “It Must Be Heaven” earned a special mention from the jury. A droll commentary — from a director whose Jacques Tati-like screen persona hardly ever speaks — on his country’s troubles, as reflected through his travels to Paris and New York, Suleiman’s film was the rare comedy in this year’s competition.

Noting that most of their chosen films dealt with relevant sociopolitical themes, Iñárritu noted, “Art can sometimes see the future…  I think that now cinema has an urgency of social consciousness expressed by different people around the world.” But he was quick to assert that artistic merit was the only consideration behind their selections: “We would not care about who directed, what country, what political message — that honestly should not matter as much as the film itself. The cinema has to speak by itself. These were cinematic decisions, not political agendas.”

The Camera d’Or, awarded by a special jury headed by Cambodian docmaker Rithy Panh to the best first film from among 26 debut features across all section of the festival, went to Guatemalan director Cesar Diaz. His drama “Our Mothers,” which premiered in Critics’ Week, focuses on an anthropologist looking for his father, after finding a clue amid the investigations into the country’s civil war.

The awards were immediately followed by a last screening, the world premiere of “The Intouchables” directors Olivier Nakache and Éric Toledano’s “The Specials,” a feel-good French studio comedy from Gaumont about two men dedicated to teaching young people with autism.

(Guy Lodge contributed to this report.)

Screenplay: Céline Sciamma, “Portrait of a Lady on Fire”

Special Mention: “It Must Be Heaven,” Elia Suleiman

Short Films Palme d’Or: “The Distance Between the Sky and Us,” Vasilis Kekatos

Queer Palm: “Portrait of a Lady on Fire,”  Céline Sciamma

Competition: “It Must Be Heaven” (Elia Suleiman)