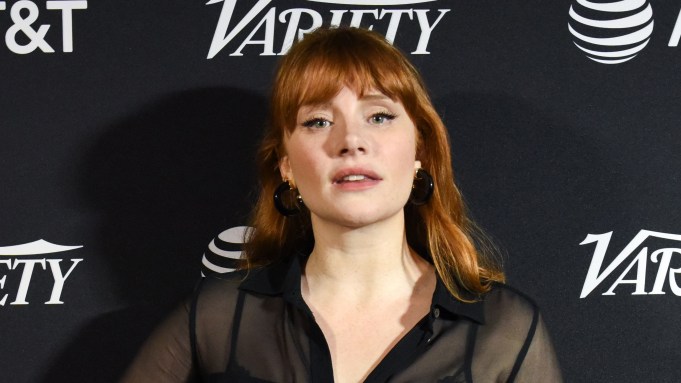 Bryce Dallas Howard got some expert advice before directing an episode of “The Mandalorian,” straight from “Star Wars” creator George Lucas and her father, director Ron Howard, who helmed “Solo: A Star Wars Story.”

Howard, who was in the Variety Studio at the Toronto International Film Festival for her upcoming documentary “Dads,” took a minute to discuss her next directing gig on the Disney Plus “Star Wars” series.

Fortunately for Howard, “Jurassic World: Fallen Kingdom” was shooting on the same studio as “Solo.”

“After ‘Jurassic’ I stayed and shadowed my dad on ‘Solo,'” Howard revealed, there she learned a couple different things,  “What he just kept saying again and again and again… ‘This is just the most incredible sandbox that you will ever get the opportunity to play in.'” The other big takeaway came directly from Lucas himself on the importance of collaboration to the ‘Star Wars’ universe.

Howard shared a story from the set of the 1988 film “Willow,” another film directed by her father and written and produced by Lucas. After trying to sculpt the narrative on set Lucas advised her father to let storyboard artist David Lowery, “take a crack at it.”

“That really is the essence of collaboration and the power of collaboration,” Howard said. “The people are just all in, give everything, own it, own the process themselves, and then are like, ‘Your turn.’ It is so exhilarating and grounding and it doesn’t ever get about the ego, because it’s all about ‘Star Wars,’ which it needs to be.”

Howard joins the group of directors tackling the first live-action “Star Wars” series. The remaining episodes of the show will be directed by Taika Waititi, Rick Famuyiwa, Deborah Chow and Dave Filoni. The series stars Pedro Pascal as an unnamed Mandalorian bounty hunter with questionable morals.

“The Mandalorian” creator Jon Favreau touched on the series at Variety‘s Entertainment & Technology summit on Thursday, saying the “gritty” show would follow the “intimate, character-driven” original film trilogy. Dallas Howard echoed those thoughts, saying that viewers will be able to relate to Pascal’s leading man.

“We’re going to connect with the character. Things are very character-driven. I come from the background of being an actor and understanding not just making leaps because it says something on the page, but really being like, ‘Okay, the emotional logic is really adding up here and really paying off,'” she told Variety.

“The Mandalorian” premieres on Disney Plus on Nov. 12.