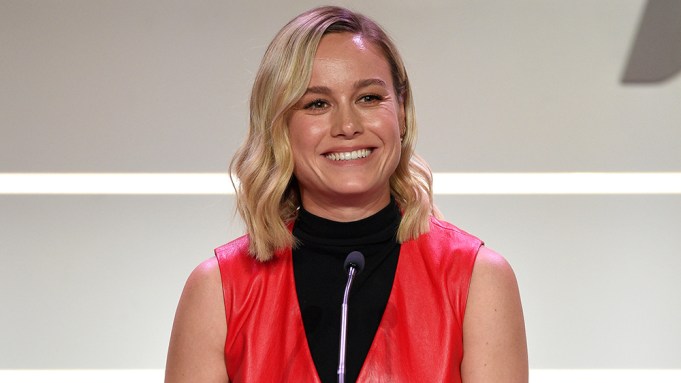 Brie Larson talked about her upcoming film “Just Mercy” and the Equal Justice Initiative at Variety‘s Power of Women luncheon on Friday at the Beverly Wilshire.

Larson was being honored at the luncheon presented by Lifetime for her work with the Equal Justice Initiative (EJI). In “Just Mercy,” she portrays one of the co-founders of the organization, Eva Ansley, who also accompanied her at the event.

She was introduced by Natalie Portman, a former Power of Women honoree herself. Portman first met Larson through their work with Time’s Up. “I was immediately struck by her all-encompassing warmth, her completely unique way of seeing the world, and her razor-sharp intellect,” Portman said. “It became quickly clear that Brie would become a leader.”

Larson, Portman explained, “tirelessly” devoted herself to getting more women and people of color represented in entertainment journalism. “And suddenly, a practice that we had all become used to — namely, being interviewed by only white men — was questioned at every junket, every premiere.”

Larson recalled her work with Time’s Up as “a painful and emotional time, but it was a time that I remember as pure sisterhood.”

“I gained so many sisters in that darkness, and this ability to take what was chaotic, and find a new order with the minds of our community is what I hope to express deep importance to today,” she began her speech.

She talked about Ansley and the story of EJI as told in “Just Mercy”: Bryan Stevenson started the initiative in 1989 to provide legal representation to prisoners who may have been wrongly convicted, who may not be able to afford effective representation, or who may have been denied a fair trial. Ansley saw injustices in her own community, and had been trying to start a grassroots movement when Stevenson reached out to her.

“Together, 30 years later, EJI has handled thousands of cases and has a staff of 70,” Larson noted. “And while they’ve experienced moments of success — and success for them is not something small, it is giving someone’s life back to them — it doesn’t meant that every case ends in justice.”

“When I was prepping for the film, I asked Eva how she keeps going in the face of so much working against her, and she said, ‘If all I can do is bring a little hope to someone, that’s enough. No one needs to feel alone.’ Well, f—,” she went on. “I’ve been chewing that sentiment for a year now, and here’s what I’ve begun to practice with that: every interaction is a chance to bring hope.”

“When Eva says hope, I know that she doesn’t mean saying blanket statements like ‘It’s gonna be okay’ to someone who’s hurting. We’re way more intelligent than that. We know deep down that there’s something more we’re asking for. Hope for her looks like getting very close to those around her, listening, asking questions, and developing steps to alleviate that pain. This kind of hope is an antidote to loneliness. This kind of hope is an elixir to stagnation. When hope is in the room, curiosity and introspection of even the harshest realities can be interrogated.”

“So I ask: where can you gain to listen and where can you bring hope? Can you help us to live in a hope that exists as not just a thought, but a process of ceaseless effort? We all have busy lives, but I can guarantee you that you can do more,” she concluded before bringing Ansley herself to the stage to talk about EJI.

“We have created meaningful opportunities to change the narrative on race in America,” Ansley said. “To quote Bryan, truth and reconciliation is sequential. First, we have to tell the truth.”

The other honorees feted at the Power of Women luncheon were Jennifer Aniston, Chaka Khan, Mariah Carey, Dana Walden and Awkwafina.