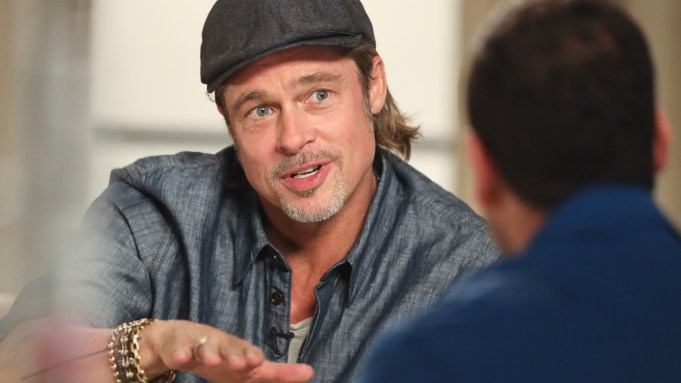 Quentin Tarantino’s script for “Once Upon a Time in Hollywood” was under such an insane lock and key that co-star Brad Pitt had to read the only physical copy under the watchful eye of the director.

Pitt explained his in-house audition process — courtesy of Tarantino’s one-script rule — and response to the film’s writing to Adam Sandler (“Uncut Gems”) during a conversation for Variety Studio: Actors on Actors.

“Tarantino’s different. Me, who’s never done Shakespeare, but there is a specific rhythm. I find that with the Coen brothers and I find that with Tarantino, there’s a very particular music to it where, with some jobs we do, we get to riff and that’s great. We make it natural, we put our little interesting bits in it, and we make it our own. But here, it only lets the air out of the tire. He’s one of the few writers that I read where you can hear it immediately.”

“I think that may have been a little bit of the valley, knowing a lot about L.A. and the fact that he married an Israeli girl. The bagel was on his mind.”

Variety‘s “Actors on Actors” issue will hit newsstands Nov. 12. The Emmy-nominated companion series will air on PBS stations and the World Channel starting on January 2nd.