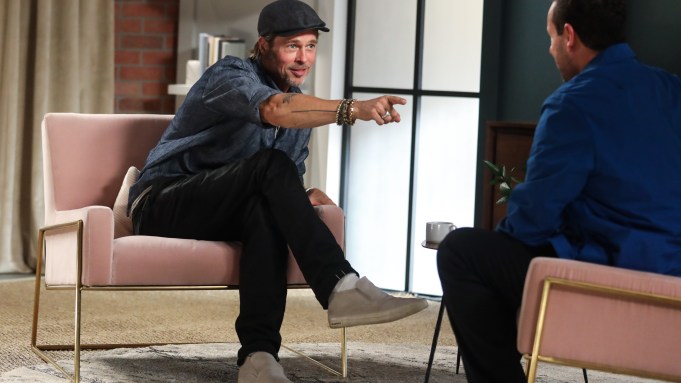 Before Netflix produced a fordable slate of awards movies this year — including “The Irishman,” “Dolemite is My Name,” “The Two Popes” and “Marriage Story” — the streaming goliath initially needed credibility among filmmakers.

Both Adam Sandler and Brad Pitt were early adapters, as two of the first A-list stars to crossover to Netflix. In 2014, Sandler signed a multi-movie deal with Netflix for his projects to be released directly into homes. And Brad Pitt also made the leap to Netflix shortly after that, with his 2017 military satire “War Machine.”

For a conversation for Variety’s Actors on Actors issue, on newsstands on Nov. 12, Pitt and Sandler discuss how Netflix has changed Hollywood.

“You were one of the first to go to Netflix,” Pitt tells Sandler. “You crossed the picket line.”

“I sure did,” Sandler responds. “I didn’t even know I was doing that. They were interested in working together; they were so passionate. I’m just tight with Netflix. They love providing opportunities for many different types of comedies.”

Pitt points out that he’s not against streaming movies, but he sees the pros and cons. “I guess my point is, I’m all for change,” Pitt says. “I’m not going to fight. I see the positive more and more. I see really interesting material get made … On the other hand, people talk about lamenting the death of the cinematic experience. Is that gone, because the home experience has gotten so good?”

“I don’t see it being gone,” Sandler responds. “I don’t think stuff goes away forever. I just think this is where it’s at right now.”

Pitt points out more pluses — and one minus — associated with Netflix. “The upside of films through streaming is a lot of them get more eyes on it; more people actually see them. The downside: There’s so much material that they can become disposable.”

Sandler doesn’t buy that argument. “It seems like stuff that is exciting to see, though, does get talked about a lot, where you say, ‘OK, I’ve got to check that out.'”

But there is one indisputable benefit to working with Netflix. “What I love is we don’t have to do much press,” Pitt says. “It’s nice, isn’t it? We don’t have to get out there. We’re not fighting for eyes. We’re not trying to put butts in seats, as they tell us we need to do.”

Pitt is in the Oscars race this year for his performances in Quentin Tarantino’s “Once Upon a Time in Hollywood” and James Gray’s” space epic “Ad Astra.” Adam Sandler, meanwhile, is receiving some of the best reviews of his career for playing a New York jeweler with a gambling problem in the Safdie brothers comedy “Uncut Gems.”

“Variety Studio: Actors on Actors” is an Emmy Award-winning series that highlights the best TV and movie performances of the year. In addition to Pitt and Sandler, the latest season includes conversations between Tom Hanks and Renee Zellweger, Jennifer Lopez and Robert Pattinson, Laura Dern and Sterling K. Brown, and Chris Evans and Scarlett Johnasson, among others. The series will air on PBS SoCal starting on Jan. 2.