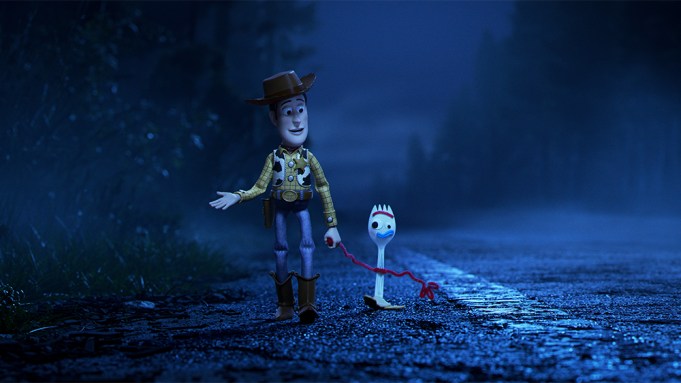 “Toy Story 4” is heading for a decisive repeat victory at the North American box office with about $53 million in its second weekend, early estimates showed Friday.

The Pixar sequel, which brings back Woody and Buzz Lightyear after a nine-year hiatus, is dominating as expected with new entries “Annabelle Comes Home” and “Yesterday” in a fight for second place with about $15 million each.

Disney-Pixar’s “Toy Story 4” collected $118 million in its inaugural weekend and its North American total topped $167 million in its first six days amid positive reviews and solid word-of-mouth. “Toy Story 4” is projected to decline by about 55% and finish the frame with around $230 million domestically in its first 10 days. It’s already passed “Us” as 2019’s fourth-highest domestic grosser behind three other Disney titles: “Avengers: Endgame” at $835 million, “Captain Marvel” at $426 million and “Aladdin” at $294 million.

The film, which debuts 24 years after the original “Toy Story,” is directed by Josh Cooley in his feature helming debut. It follows Woody as he deals with a confused spork named Forky, voiced by Tony Hale. “Toy Story 4” has also launched in about two-thirds of the international market with $123 million so far.

New Line’s “Annabelle Comes Home” got a head start on the weekend with a Wednesday launch at 3,603 domestic venues, pulling in $10.8 million in its first two days and placing the supernatural horror-thriller on track to take in another $15 million by the end of the weekend. The film is the third Annabelle title about a possessed doll and the seventh entry in the Conjuring franchise. “Annabelle Comes Home” stars McKenna Grace, Madison Iseman, Patrick Wilson and Vera Farmiga. It carries a 67% Rotten Tomatoes score.

“Annabelle Comes Home” has taken in $12.2 million at 13,260 screens in 50 international markets on Wednesday and Thursday. It opens in another 13 territories Friday.

Fantasy-drama “Yesterday” is performing above expectations, which had been in the $10 million range at 2,603 sites. The Universal-Working Title film, starring newcomer Himesh Patel as an aspiring songwriter, is set in an alternate reality in which Patel’s character skyrockets to superstardom after a freak accident leaves him as the only person who remembers the Beatles.

Lily James, Kate McKinnon and Ed Sheeran, who plays himself, co-star in the movie, which features new versions of hit Beatles songs. Danny Boyle, the filmmaker behind “Slumdog Millionaire,” directed “Yesterday,” written by “Love Actually” screenwriter Richard Curtis. “Yesterday” premiered in May as the closing night film of the Tribeca Film Festival. Reviews have been mixed with a 61% score on Rotten Tomatoes.

Disney is expanding its Marvel mega-hit “Avengers: Endgame” this weekend by doubling its re-release run to 2,025 locations with an exclusive chance to see an unfinished deleted scene that didn’t make it into the initial film, as well as an introduction video by director Anthony Russo and a sneak peek at “Spider-Man: Far From Home.” “Avengers: Endgame,” which has pocketed $2.75 billion worldwide to date, needs $43 million more to beat James Cameron’s “Avatar” and become the highest-grossing film of all time.

“Avengers: Endgame,” now in its 10th weekend, is battling the sixth weekend of “Aladdin” for fourth place at around $8 million each. That should lift “Avengers: Endgame” to about $843 million in North America by the end of this weekend.

The first half of 2019 is ending with total North American box office at $5.44 billion as of June 26, down 9.7% from last year, according to Comscore. Summer is also off 6.7% to $1.96 billion but hopes are high for a surge in coming weeks, with Sony launching “Spider-Man: Far From Home” on July 2 and Disney debuting its live-action/CGI hybrid “The Lion King” on July 19.