Continue to Variety SKIP AD
You will be redirected back to your article in seconds
Jun 21, 2019 1:27pm PT 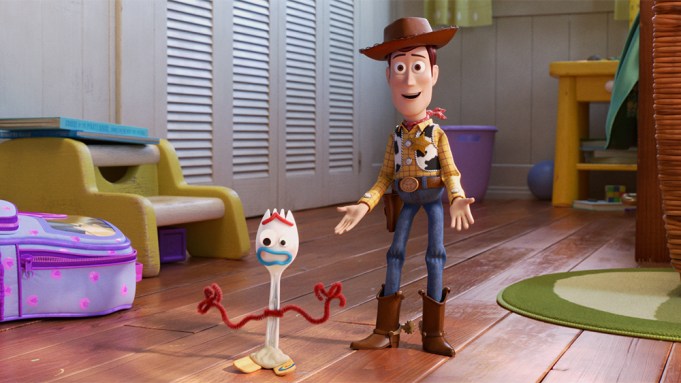 If the forecast holds, “Toy Story 4” would rack up the third-biggest debut of 2019 after “Avengers: Endgame” at $357 million and “Captain Marvel” at $353 million. “Toy Story 4” opened impressively with $12 million in Thursday night previews in North America — the second-best preview number for an animated movie following the $18.5 million from Pixar’s “Incredibles 2” a year ago.

The early results for “Toy Story 4,” which brings back the familiar Sheriff Woody and Buzz Lightyear toys after a nine-year hiatus, show the comedy coming in slightly under pre-release forecasts of $140 million domestically at 4,575 theaters this weekend. That would be the second largest animated opening after “Incredibles 2” at $182 million. “Finding Dory” is currently second at $135 million with the 29th biggest domestic opening of all time.

Comscore’s PostTrak data of audience members surveyed showed 83% of patrons said they would “definitely recommend” the film to their friends. A total of 60% of respondents cited being fans of the franchise as their main reason for seeing the film. The survey also showed 26% said they would see the film again in theaters and 22% said they plan to buy the film on Blu-Ray.

The film, which debuts 24 years after the original “Toy Story,” is directed by Josh Cooley in his feature helming debut. It follows Woody as he deals with a confused spork named Forky, voiced by Tony Hale. “Toy Story 4” is also launching this weekend in about two-thirds of the international market with debuts in Australia, China, Mexico, South Korea and the UK.

Orion Pictures is seeing results slightly under forecasts with about $14 million for “Child’s Play,” a remake of the 1988 film about a voodoo doll named Chucky. Expectations had been in the $16 million to $18 million range at 3,007 locations. Mark Hamill voices Chucky in the R-rated reboot, which follows a woman (Aubrey Plaza) who unwittingly gives her son a malevolent doll for his birthday.

“Child’s Play” will probably finish second ahead of a trio of holdovers, which are heading for the $11 million to $12 million range — Universal’s third weekend of “The Secret Life of Pets 2,” Sony’s second weekend of “Men in Black: International” and Disney’s fifth frame of “Aladdin,” which has topped $272 million domestically.

Lionsgate’s “Anna,” an R-rated actioner starring Russian model Sasha Luss as an assassin, is heading for a modest launch in the $4 million range at 2,114 sites. Luke Evans, Cillian Murphy and Helen Mirren also star. “Anna,” which is being released via the Summit label, took in $325,000 at 1,700 sites in Thursday night previews.

“Toy Story 4” is coming into the overall North American market down 8.6% for the year with $5.13 billion as of June 19, according to Comsore. It should dominate moviegoing until Sony opens “Spider-Man: Far from Home” on July 2.