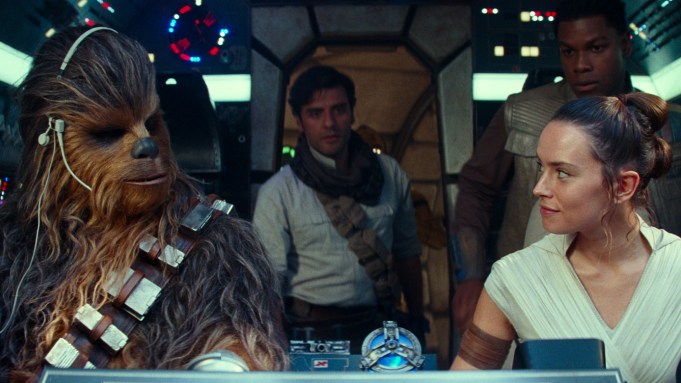 “Star Wars: The Rise of Skywalker” will crush the box office this weekend with an enormous $195 million after taking in $90 million on Friday.

“The Rise of Skywalker’s” Friday total represents the sixth-highest opening day of all time, behind “Harry Potter and the Deathly Hallows: Part 2,” which generated $91 million when it opened in 2011. “Star Wars: The Last Jedi” and “Star Wars: The Force Awakens” both topped “The Rise of Skywalker’s” debut with $104 million and $119 million, respectively, for the fourth and second-highest opening days of all time.

The final chapter in the Skywalker saga is opening at 4,406 locations nationwide, and, should estimates hold, will come in slightly below higher industry forecasts of $200 million, though still above Disney’s projections in the $165 million arena. “The Force Awakens” and “The Last Jedi,” both subject to more favorable critical reviews, reeled in $248 million and $220 million in their openings weekends. Despite “The Rise of Skywalker’s” somewhat weaker debut, it still marks a hefty win for moviegoing at the end of 2019, and for Disney, capping off its strongest year on record.

Fellow new release “Cats” generated $2.6 million on Friday and is looking at a mediocre $8 million to land in No. 4 for the weekend from 3,380 North American locations. That number is significantly below the $15 million to $17 million range earlier projections had estimated.

Universal’s adaptation of the Andrew Lloyd Weber musical, directed by Tom Hooper, has been slaughtered by critics and social media despite its star-studded cast, including Idris Elba, Taylor Swift, Judi Dench, Ian McKellan and Jason Derulo. With an abysmal 19% on Rotten Tomatoes and C+ CinemaScore, “Cats” has a long way to go to profitability, considering its $95 million production budget. The musical focuses on a group of cats called Jellicles, who compete to be chosen by Old Deuteronomy (Dench) to ascend to the Heaviside layer and receive a new life.

Meanwhile, Lionsgate’s awards contender “Bombshell” opened wide this weekend with $1.8 milllion from 1,480 theaters on Friday. It’s looking at about $5 million through the weekend to land at No. 5. The studio is banking on “Bombshell’s” two Golden Globe nominations and four Screen Actors Guild nominations to give it extra play through the New Year and the awards season and generate a strong multiple.

Charlize Theron, Nicole Kidman, and Margot Robbie star alongside John Lithgow in Jay Roach’s film, which dramatizes the events leading up to the Roger Ailes scandal at Fox News. It boasts a 65% Rotten Tomatoes score, the highest of the weekend’s wide releases.

Elsewhere, “Jumanji: The Next Level” will come in a distant second behind “Rise of Skywalker” with about $24 million through the weekend, marking a relatively admirable 58% decline, considering the competition posed by the Star Wars entry. The sequel is on track to cross $100 million domestically this weekend and is positioned to take advantage of the lucrative holiday weeks when school is out and the box office historically sees large multiples. So far, the comedy adventure starring Dwayne Johnson, Jack Black, Kevin Hart and Karen Gillan has totaled $236 million worldwide.

Holdovers “Frozen 2” and “Knives Out” should take in another $12 million and $6 million, respectively, for the No. 3 and 4 slots. “Frozen 2” has marked one of the year’s most successful films, with $1.04 billion globally, while Rian Johnson’s “Knives Out” has earned $85 million domestically since its debut.