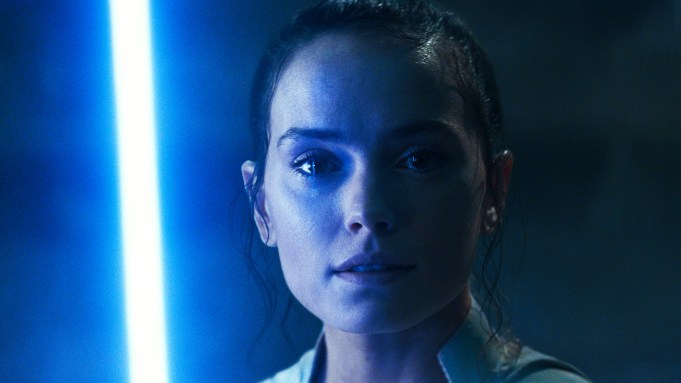 “Star Wars: The Rise of Skywalker” will launch to a muscular $195 million domestically this weekend, according to midday Friday estimates.

Disney, the studio behind the sci-fi franchise, hasn’t released numbers, but if rival studios’ figures hold true that will be a spectacular bow for the adventure film, albeit one that trails the launches of other films in the series. “The Force Awakens” debuted to $248 million while “The Last Jedi” bowed to $220 million. Both movies were embraced by critics, who have been colder towards “The Rise of Skywalker,” knocking it for being over-stuffed and unimaginative.

“The Rise of Skywalker” is opening shy of the $200 million that some industry experts had predicted it would earn, though it is bowing higher than Disney’s low-ball estimates of $160 million. Even if “The Rise of Skywalker” is showing signs that Star Wars fans are feeling a little less crazed about the franchise after two prior chapters and two spin-offs (“Rogue One” and the late, lamented “Solo”), it still stands to be a massive hit. It will cap a sizzling year for Disney at the box office, one that’s already seen the studio shatter records with $10 billion in global ticket sales thanks to an armada of blockbusters that includes “The Lion King,” “Toy Story 4,” and “Avengers: Endgame.”

Universal’s “Cats,” however, appears to have been undone by the scalding social media buzz and abysmal reviews. The adaptation of the hit Andrew Lloyd Webber musical is stumbling out of the gate and on pace to earn a pallid $8.5 million. That’s far less than the $15 million to $17 million that it was initially projected to rack up and it’s a poor start for a film that carries a roughly $100 million price tag. The week of Christmas is one of the busiest times for movie-going, so it’s possible that “Cats” could still draw moviegoers who are looking for some family-friendly entertainment over the coming days, but this weak start puts the movie in a dangerous position.

Lionsgate’s “Bombshell” is also falling short of estimates that had it widening its limited opening with between $7 million and $14 million. It is on pace to open to $6.5 million. It’s early to label that a disappointment though. “Bombshell,” which tells the story of how Fox News anchors Megyn Kelly and Gretchen Carlson exposed Roger Ailes’ serial sexual harassment, is an Oscar contender. As awards season continues, the film could see its audience expand. It’s also benefited from strong reviews, a luxury that “Cats” does not enjoy.