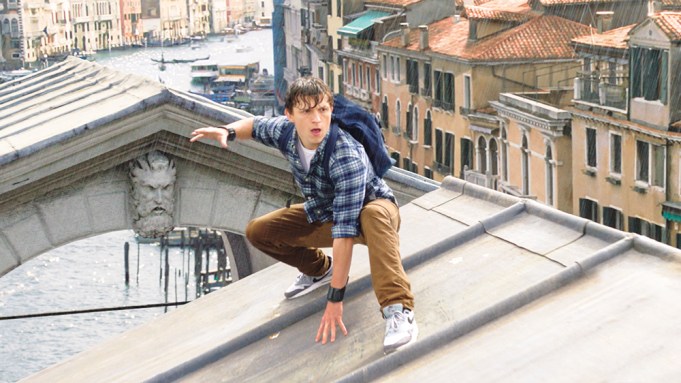 Sony’s “Spider-Man: Far From Home” has topped the $310 million worldwide box office mark in its first week, thanks to potent performances in China and North America.

The superhero tentpole, starring Tom Holland, has taken in a total of $136.8 million in China, following its $97 million opening weekend — the fourth-best debut of all time for a superhero film in the territory, behind “Avengers: Endgame,” “Avengers: Infinity War” and “Venom.”

In North America, “Spider-Man: Far From Home” has opened sensationally with $91 million in its first three days, including the second-highest Fourth of July mark with $25.2 million.

“Spider-Man: Far From Home” is opening in most other international markets this weekend. Sony reported Friday that Japan is the second highest market with $12.9 million, followed by South Korea with $12 million, the UK with $7.2 million and Hong Kong with $6.6 million.

The five markets of the Philippines, Indonesia, Malaysia, Singapore, and Thailand took in $9.2 million through Thursday. Taiwan and India each generated $2.1 million in its first two days.

Russia launched with $2.8 million on Thursday and France’s opened with $2.5 million on Wednesday. Mexico’s $3 million opening day was the best July launch for that market as was Brazil’s $2.2. million.

Holland broke out as Peter Parker in 2017’s “Spider-Man: Homecoming,” which wound up with $334 million North American total and $880 million worldwide. “Spider-Man: Far From Home” follows the 16-year-old Parker being recruited to save the world while on a school trip to Europe organized by the Midtown School of Science and Technology. Jake Gyllenhaal joins the cast as Mysterio, while Samuel L. Jackson, Zendaya, Cobie Smulders, Jon Favreau, Jacob Batalon and Marisa Tomei reprise their roles for the sequel.