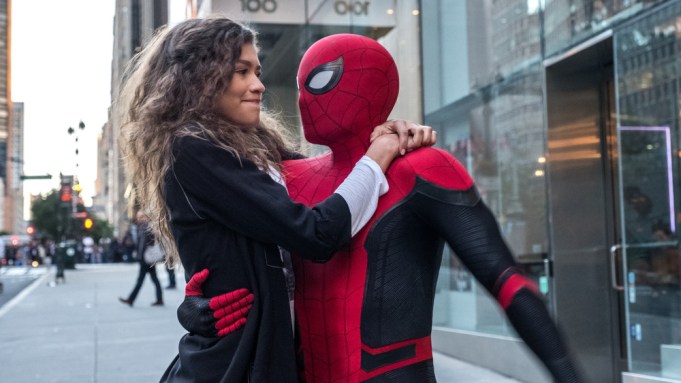 Tom Holland’s friendly neighborhood Spider-Man is ruling the international box office ahead of its release in North America.

“Spider-Man: Far From Home” collected a huge $111 million this weekend when it launched in China, Japan and Hong Kong. Most of that haul came from China, where the superhero tentpole earned $98 million, marking the fourth-best start for a comic-book adventure behind “Avengers: Endgame,” “Avengers: Infinity War” and “Venom.” In Japan, the “Spider-Man” sequel made $9.4 million, representing the second-biggest launch for a superhero movie in that territory. Hong Kong saw a $3.8 million opening weekend.

“Spider-Man: Far From Home,” the followup to “Spider-Man: Homecoming,” bows across the globe in almost all markets next weekend. The movie picks up after the events of “Avengers: Endgame” and follows Peter Parker, who is on a school trip to Europe. While abroad, he gets recruited by Nick Fury (Samuel L. Jackson) and Mysterio (Jake Gyllenhaal) to face threats from an alternate dimension.

Disney’s “Toy Story 4” also had a sizable weekend in theaters, generating $80 million from 45 international markets. The animated sequel brought in another $58 million in North America, boosting its global bounty to $496 million. Overseas, “Toy Story 4” has made $259 million.

“Toy Story 4” opened this weekend in France with $7 million. Top earning territories include Mexico with $49.5 million, the United Kingdom with $33 million and China with $24.3 million.

Among new releases, Warner Bros. “Annabelle Comes Home” launched with $45 million from 63 foreign markets. Combined with a $31 million start in North America, the spooky sequel has pocketed $76 million globally. “Annabelle Comes Home,” the seventh entry in the Conjuring Universe, saw the best start in Mexico with $6.9 million, followed by Indonesia with $5 million and India with $2.6 million.

Another newcomer, Universal and Working Title’s “Yesterday,” pulled in $7.7 million from 30 territories. The musical romantic comedy, which envisions a world where nobody has heard of the Beatles, kicked off in the U.K. with $2.8 million, as well as Australia with $2.5 million and the Netherlands with $400,000.