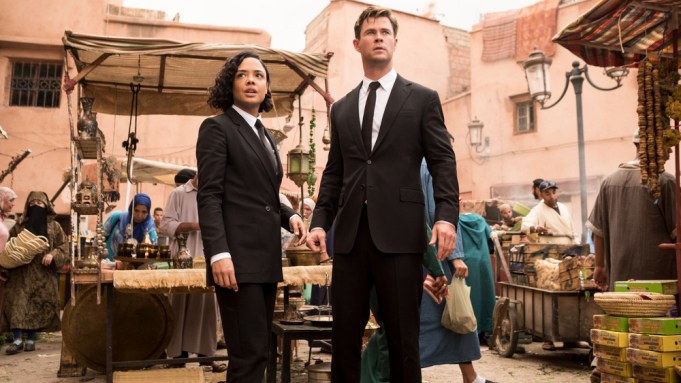 The fourth iteration of the sci-fi comedy franchise is performing well under modest expectations, which had been in the $30 million range at 4,224 locations. “Men in Black: International” stars Chris Hemsworth and Tessa Thompson, replacing Will Smith and Tommy Lee Jones as the black-suited agents dealing with a baffling series of alien attacks against Earth.

New Line’s launch of its “Shaft” reboot is also showing little traction at multiplexes with Friday estimates coming in around $8 million at 2,952 sites, far below forecasts in the $16 million to $24 million range for the weekend. And Amazon’s widened release of its Mindy Kaling-Emma Thompson comedy “Late Night” was also falling flat at about $4 million at 2,218 venues.

The sole bright spots for the weekend appear to be Universal’s second weekend of “The Secret Life of Pets 2,” declining about 53% to around $22 million, and Disney’s fourth frame of “Aladdin” with about $17 million. The live-action reboot of “Aladdin” should finish the weekend with approximately $262 million domestically.

“Men in Black: International” takes place in the same universe as the previous trilogy, with Emma Thompson reprising her role as Agent O. Kumail Nanjiani, Rebecca Ferguson, Rafe Spall and twins Laurent and Larry Bourgeois also star. The film, set in the London bureau of the top-secret Men in Black organization, is directed by F. Gary Gray and written by Art Marcum and Matt Holloway, based on the Malibu comic by Lowell Cunningham. The budget for “Men in Black: International” is $110 million, co-financed by Hemisphere and Tencent.

The previous three “Men in Black” films combined for more than $1.6 billion in worldwide box office. All three scored North American debut weekends of more than $50 million. “Men in Black: International” is also launching in most international markets. Reviews were dismal with a 25% score on Rotten Tomatoes.

“Shaft,” the fifth film in the franchise, stars Jessie Usher playing John “JJ” Shaft Jr., an FBI agent and a cybersecurity expert with a degree from MIT. Samuel L. Jackson plays his estranged father and Richard Roundtree plays his grandfather, the original Shaft, as he did in the first three “Shaft” movies in the early 1970s. Critics were unimpressed, resulting in a 35% Rotten Tomatoes score.

“Late Night” had generated forecasts in the $5 million to $9 million range. The film was acquired by Amazon following its Sundance premiere for a record $13 million and launched in four locations last weekend with a solid $246,035. It benefits from more positive reviews, sitting at 80% on Rotten Tomatoes.

Focus is seeing moderate returns on its launch of Jim Jarmusch’s “The Dead Don’t Die” with around $3 million at 613 locations. The zombie comedy, starring Bill Murray and Adam Driver, was the opening night film at the Cannes Film Festival last month. Reviews have been mixed with a 51% score on Rotten Tomatoes.

Year-to-date domestic box office as of June 12 has hit $4.93 billion, down 6% from the same point last year, according to Comscore. “Avengers: Endgame,” which has topped $826 million in seven weeks, and “Aladdin” had helped narrow the gap — which should widen again this weekend, thanks to overall business falling short of last year’s $182 million opening for “Incredibles 2.”

Disney’s “Toy Story 4” should rescue the box office next weekend. Early tracking had placed the animated comedy with a debut in the $150 million range.