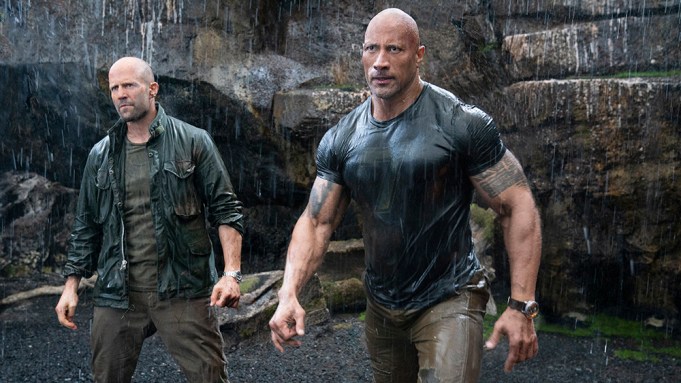 Holdover “Hobbs & Shaw” will lead the North American box office this weekend at $25 million followed by “Scary Stories to Tell in the Dark” at $22 million, early estimates showed Friday.

Disney’s fourth frame of “The Lion King” should follow in third at about $19 million, just beating Paramount’s launch of family adventure “Dora and the Lost City of Gold” with $17 million at 3,735 locations.

The third weekend of Quentin Tarantino’s “Once Upon a Time in Hollywood” is projected to finish fifth with about $10 million for a 17-day take of $99 million. The weekend total for “Once” is enough to top the openings of Disney-Fox’s “The Art of Racing in the Rain” with $8 million at 2,765 venues and Warner Bros.’ crime drama “The Kitchen” with $5 million at 2,745 sites. Bleecker Street’s opening of biopic “Brian Banks” is showing little traction with $1.7 million at 1,240 screens.

The popularity of Universal’s “Fast & Furious Presents: Hobbs & Shaw” and Disney’s “The Lion King” underlines the power of recognizable franchise fare at the nation’s multiplexes. “Hobbs & Shaw,” starring Dwayne Johnson and Jason Statham, should finish the weekend with nearly $109 million in its first 10 days.

“The Lion King” will end its fourth frame with about $472 million domestically in its first 24 days, the 16th-highest total of all time. Jon Favreau’s photo-realistic remake of the 1994 animated classic has already topped $1.2 billion worldwide.

“Scary Stories” is opening slightly above the top end of forecasts at 3,315 locations. Producer Guillermo del Toro selected “Trollhunter” director André Øvredal to direct the adaptation, and shares story credit with Patrick Melton and Marcus Dunstan, with a screenplay by Dan Hageman and Kevin Hageman.

The PG-13 film is set in 1968 America in the small town of Mill Valley, where a book of stories written by a troubled young girl from the 1800s becomes real for a group of teens. “Scary Stories,” which was co-produced and co-financed by CBS Films and Entertainment One, has scored well with critics and carries an 82% “fresh” rating on Rotten Tomatoes.

Dora the Explorer’s big-screen debut is launching in line with expectations. Isabela Moner stars as Dora, who’s starting high school and dealing with her parents (portrayed by Eva Longoria and Michael Peña) going missing — leading to Dora trying to solve the mystery of a lost Inca civilization. “Dora” is launching at 3,735 venues amid mostly positive reviews with a 78% Rotten Tomatoes rating.

“The Art of Racing in the Rain” is also performing in line with expectations. The drama stars Milo Ventimiglia, Amanda Seyfried and Kevin Costner as the voice of an elderly dog named Enzo. The 20th Century Fox film, distributed by Disney Studios Motion Pictures, received mixed reviews from critics with a 48% score on Rotten Tomatoes.

“The Kitchen,” starring Elisabeth Moss, Tiffany Haddish and Melissa McCarthy, is under-performing expectations with a dismal 22% score on Rotten Tomatoes. The trio star as wives of Irish mobsters who take over operations in New York City’s Hell’s Kitchen neighborhood after the FBI arrests their husbands in the 1970s.