‘Godzilla: King of the Monsters’ Biting Into $50 Million in North America 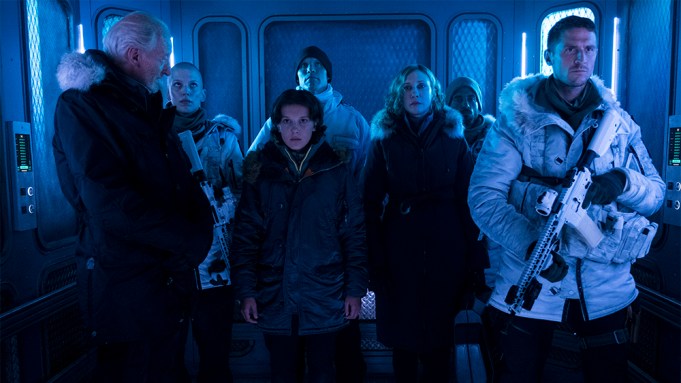 “Godzilla: King of the Monsters” is living up to its name, roaring to around $50 million in its opening weekend at 4,108 North American sites, early estimates showed Friday.

The Warner Bros.-Legendary sequel to 2014’s “Godzilla” should top the second weekend of Disney’s “Aladdin” at about $41 million along with newcomers “Rocketman” at around $22 million and “Ma” at $20 million.

“Godzilla: King of the Monsters,” the 35th movie in the 65-year-old franchise, is performing in line with pre-release forecasts in the $50 million to $55 million range. It’s the third installment in Legendary’s MonsterVerse and will likely wind up well behind the original, which launched with $93 million and went on to collect $200 million at the domestic box office and $529 million globally.

“King of the Monsters” should debut about 20% below 2017’s “Kong: Skull Island,” the second entry in Legendary’s monster franchise. “Kong: Skull Island” opened with $61 million in North America, and wound up with $168 million domestically and $566 million worldwide.

Directed by Michael Dougherty, “Godzilla: King of the Monsters” centers on the formidable monster battling his nemesis, King Ghidorah, and other ancient creatures who threaten to destroy Earth. The film stars Millie Bobby Brown, Vera Farmiga, Kyle Chandler and Bradley Whitford. Critics have been unimpressed, giving “Godzilla: King of the Monsters” a 41% “rotten” score on Rotten Tomatoes.

“Aladdin” should be the runner-up after an impressive $116 million haul during the four-day Memorial Day weekend. The live-action reboot of the 1992 animated classic will finish the weekend with more than $180 million domestically in its first 11 days.

“Rocketman,” a musical about the life of Elton John, is performing at the top end of forecasts, which had the film at around $20 million from 3,610 venues. The movie, starring Taron Egerton, debuted at the Cannes Film Festival to strong reviews. “Rocketman” currently carries a 90% “fresh” score on Rotten Tomatoes.

Universal-Blumhouse Productions’ “Ma,” starring Octavia Spencer as a mysterious friend to teenagers, is right in line with pre-release forecasts in the range between $18 million and $22 million from 2,808 screens. Reviews have been mixed with a 60% score on Rotten Tomatoes.

Lionsgate’s third weekend of “John Wick: Chapter 3” is heading for a fifth-place finish with about $10 million. That will give the Keanu Reeves actioner about $124 million domestically in its first 17 days.