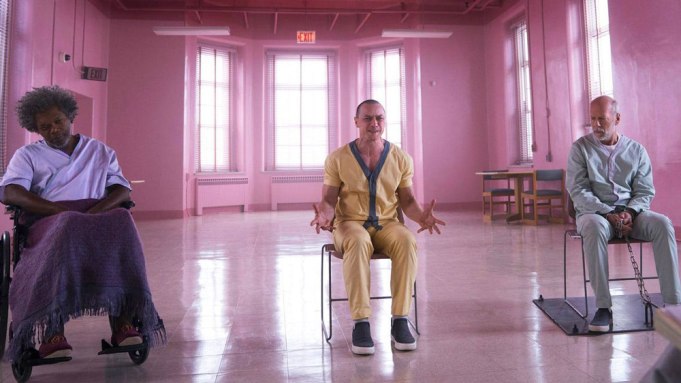 If estimates hold, “Glass” will come in behind “American Sniper” ($107 million) and “Ride Along” ($48 million) as the third-best showing for both January and MLK holiday weekend.

The supernatural thriller, a sequel to 2000’s “Unbreakable” and 2016’s “Split,” arrived slightly behind Universal Pictures’ projections heading into the weekend. It’s still a solid showing, to be sure, since the movie was produced for just $20 million. But given the cult status of “Unbreakable” and the surprise box office success of “Split,” industry watchers were anticipating a stronger start for “Glass.” However, middling reviews and a so-so audience reception didn’t help momentum.

“Glass” saw James McAvoy reprise his role from “Split,” while Bruce Willis and Samuel L. Jackson returned as their characters from “Unbreakable.” The audience for “Glass” was slightly older than “Split,” with 65% of moviegoers over the age of 25. That tracks, since “Glass” was the finale to a trilogy that began almost 20 years ago, meaning “Unbreakable” fans came out in full force for the epic conclusion.

“That speaks to the breadth of this trilogy,” said Jim Orr, Universal’s president of domestic distribution. “M. Night Shyamalan masterfully brought together the characters of ‘Unbreakable’ and ‘Split’ to create a highly anticipated event film. We couldn’t be happier to be in business with Night and Blumhouse.”

The Martin Luther King Jr. holiday usually sees a number of new offerings, but studios largely sat this weekend out to make room for “Glass.” With that said, a number of holdovers rounded out box office charts.

STX Films and Lantern Entertainment’s “The Upside” saw a surprisingly strong second weekend, adding another $15.67 million over the three-day frame. The film is projected to earn $19.5 million for the four-day weekend, which would put its domestic tally at $47.82 million. Overseas, the comedic drama starring Kevin Hart and Bryan Cranston has made $4.1 million from 33 markets.

“The Upside’s” weekend haul was enough to secure second place, while Warner Bros.’ “Aquaman” looks to come in at No. 3. DC’s latest superhero adventure, starring Jason Momoa as the Atlantean king, crossed a major milestone in North America. “Aquaman” has now surpassed $300 million in ticket sales after adding $10 million in its fifth week of release. Globally, the aquatic tentpole has generated over $1 billion in box office revenues.

A surprise contender, Japanese anime film “Dragon Ball Super: Broly,” could surpass “Aquaman” for third place when final numbers come in on Monday. The sci-fi fantasy secured a huge $7 million debut on Wednesday and is expected to bring in around $10 million over the four-day holiday for a domestic total of $20 million. “Broly,” the 20th film in the “Dragon Ball” series, has pocketed $50 million internationally.

Even with a boost from “Glass,” the domestic box office is still pacing behind 2018’s numbers by over 13%, according to Comscore. With highly anticipated releases like “Avengers: Endgame,” “Lion King,” and “It: Chapter 2” still to come, box office watchers don’t anticipate a decline for too long.