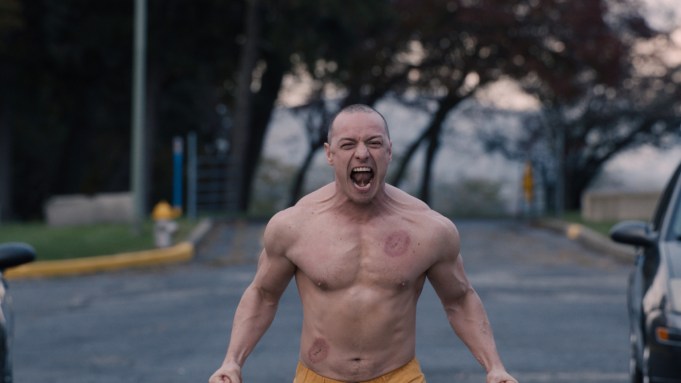 “Glass” dominated the foreign box office for the second weekend in a row as M. Night Shyamalan’s twisted thriller generated another $23.6 million from 55 overseas territories.

That brings the film, which shares a cinematic world with 2000’s “Unbreakable” and 2017’s “Split,” to $162.7 million worldwide. Disney is distributing the film overseas, while Universal is handing the rollout in North America.

Falling not far behind is “Once Upon a Deadpool,” the PG-13 version of “Deadpool 2.” Fox’s superhero sequel — starring Ryan Reynolds — marks the first time a “Deadpool” movie has gotten a theatrical release in China. The Middle Kingdom has strict standards about profanity and sex on screen, so it’s a surprise the raunchy mercenary is even getting the big-screen treatment in the mainland. Moviegoers seem to be embracing the Merc With a (cleaner) Mouth, despite the fact that the movie opened months ago in the States. It brought in $21.4 million when it debuted this weekend, taking its global tally to $443 million when combined with last year’s haul from “Deadpool 2.”

The release in China puts “Deadpool 2” ahead of “X-Men: Days of Future Past” ($747 million), meaning both “Deadpool” films rank as the top-grossing entries in the “X-Men” franchise. The re-cut sequel, which removed a lot of the profanity and gore, was first released in December and brought in around $7 million globally.

Warner Bros.’ “Creed II,” the second installment in the Rocky Balboa spinoff series, returned to box office charts this weekend and pocketed $13.8 million in 45 international territories. It opened in a number of new markets, including Italy ($4.1 million), Spain ($2.2 million), and Germany ($2.1 million). Michael B. Jordan stars in the sports drama, which first launched in North America last November. “Creed II” has now crossed $75.6 million overseas and $191 million worldwide, officially taking it past the total haul of the original “Creed.”

Meanwhile, Paramount’s “Transformers” origin story “Bumblebee” pulled in another $9 million from 60 markets for an international tally of $317.2 million. The latest installment in the sci-fi franchise has seen the best returns in China, where it made $6.9 million this weekend, bringing its total in that territory to $155 million. It releases in its final market, Japan, on March 22.

Fox’s “Bohemian Rhapsody” is still rocking as the Queen biopic drummed up $8.8 million in 41 territories. That takes its international total to a massive $611.3 million for a worldwide bounty of $817 million.

Among newcomers, “The Kid Who Would Be King” earned $1.9 million when it opened in 20 international markets. Fox’s family friendly adventure flopped in North America, debuting with a paltry $7 million. Joe Cornish directed the film, which cost $60 million.

Elsewhere, Warner Bros.’ “Aquaman” hit a significant milestone and now officially ranks as the highest-grossing film in the DC Universe. The aquatic superhero adventure starring Jason Momoa has amassed $1.09 billion globally. It earned another $7.8 million this weekend for an overseas total of $774 million.