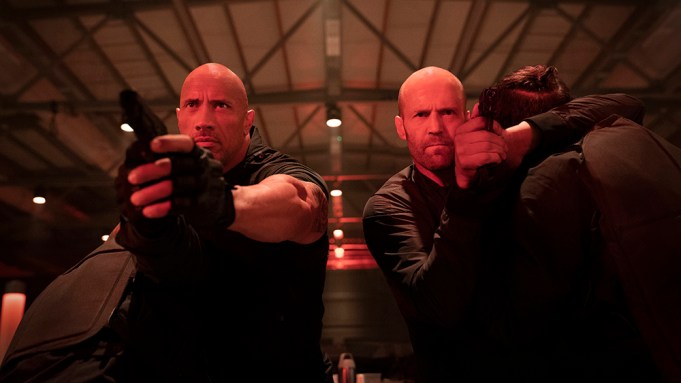 This summer has proved a stark reminder that Hollywood studios can’t always bank on recognizable brands. Despite hailing from well-known properties, audiences weren’t all that interested in seeing new chapters from franchises including “X-Men,” “Godzilla” and “The Secret Life of Pets.”

So it was still a bit of a gamble for Universal to see if moviegoers would turn out for “Hobbs & Shaw,” the first offshoot from the studio’s highly profitable and ultra-popular “Fast & Furious” universe. The spinoff, putting the spotlight on Dwayne Johnson’s character Luke Hobbs and Jason Statham’s Deckard Shaw, debuted in North America with a solid $60 million, signaling it could end up a risk worth taking. While that’s a softer start among “Fast & Furious” entries, standalone chapters aren’t expected to be as strong as the main series.

The high-octane action adventure will still rely heavily on how much mileage it can get out of the international box office. “Hobbs & Shaw” carries a hulking $200 million price tag, meaning it’ll need to keep its foot on the gas over the coming weeks to get into the black. Overseas, the movie has already made $120 million. It has yet to open in China, where the tributes to fast cars and muscular men are especially beloved.

Its also promising that as the series grows, so does its foreign footprint. With 2001’s original “The Fast and The Furious,” international markets represented 30% of the film’s total grosses, according to Comscore. A decade later, and 66.7% of the worldwide ticket sales for “Fast Five” came from overseas. By the time 2017’s “The Fate of the Furious” rolled around, 81.7% of box office receipts were from abroad. But even with a growing fan-base, spinoffs can be something of a mixed bag at the box office.

“Spinoffs themselves are usually an over-eager bunch at the box office, most of them veering off in a direction dictated by a studio’s box office hunger rather than true yearning from audiences,” said Jeff Bock, a senior box office analyst with Exhibitor Relations. “I think audiences will always be a little more critical when it comes to sequels and reboots. That said, if done correctly, they can certainly boost a studio’s bottom line.”

Industry watchers point to one key factor as to why, then, audiences turned out for “Hobbs & Shaw.”

“The main ingredients to a successful spinoff is great casting,” said Paul Dergarabedian, a senior media analyst with Comscore. “You need to find those characters within an ensemble that can carry a movie on their own.”

For that reason, analysts suggest that “Hobbs & Shaw” benefited from teaming up Johnson and Statham, two franchise regulars who are otherwise always at odds. The charisma between the two allowed the movie to rest on the shoulders of the two gigantic men without ever feeling like it strays too far from the world of “Fast & Furious.” And indeed, “Hobbs & Shaw” still delivers on the utterly outrageous. There’s no shortage of over-the-top stunts, zany high-speed car chases and explosive stunts.

“You have to deliver that familiarity while offering a fresh take,” Dergarabedian said. “Nobody goes to see a ‘Fast & Furious’ movie to see a tea party.”

Adds Jim Orr, Universal’s president of domestic distribution, “With spinoffs, you have to have the DNA of what made the original popular. David Leitch, the Rock and Jason Statham created an original and really thrilling adventure that complements the franchise tremendously well.”

The idea that venerated franchises have a seemingly endless mythology to dip into for sequels, spinoffs and reboots doesn’t always come to fruition. Even some of Hollywood’s biggest moneymakers, “Harry Potter” and “Star Wars,” showed concerning signs of fatigue as of late. Take 2018’s “Fantastic Beasts: The Crimes of Grindelwald” and “Solo: A Star Wars Story.” While neither spinoff was expected to reach the heights of the original series, both failed to live up to their predecessors, “Fantastic Beasts and Where to Find Them” and “Rogue One: A Star Wars Story.” But last year’s “Creed II,” a byproduct of the “Rocky” franchise, was another hit, due in part to the chemistry between Michael B. Jordan’s Adonis Creed and Sylvester Stallone’s Rocky Balboa.

The holy grail for studios is finding the next lucrative and sprawling film universe. With every Hollywood company on the hunt for another Marvel behemoth or even “John Wick,” it’s no surprise audiences have grown more skeptical about what might seem like a half-baked way to capitalize on a big brand.

“Moviegoer sentiment is rarely constant,” points out Shawn Robbins, chief analyst at Boxoffice.com. “It can sometimes be an uphill battle for franchise movies to live and succeed on their own merits, but that comes with the territory of expanding on-screen universes and trying to figure out what works best.”