Continue to Variety SKIP AD
You will be redirected back to your article in seconds
Mar 8, 2019 1:28pm PT 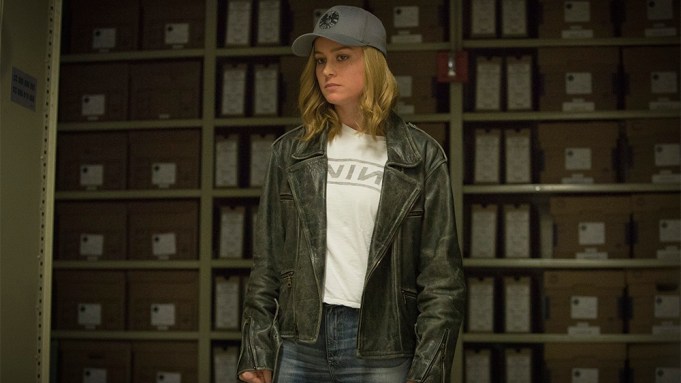 “Captain Marvel” is heading for a dazzling opening weekend of at least $150 million in North America, early estimates showed Friday.

Should the projections hold, “Captain Marvel” will wind up with one of the top 20 domestic opening weekends of all time. Sony’s “Spider-Man 3” has the 19th-highest launch frame with $151.1 million in 2007. It will be the biggest opening title since “Incredibles 2” launched with $182 million in June.

The projections follow an impressive $20.7 million take from Thursday night previews, the 18th-highest preview number of all time and the fifth-biggest for a Marvel title, behind only the second and third “Avengers,” “Black Panther,” and “Captain America: Civil War.”

The Disney-Marvel tentpole, which expands to 4,310 sites on Friday, has been expected to take in at least $125 million this weekend, with some forecasts in the $150 million range. “Captain Marvel” — the 21st title in the Marvel Cinematic Universe and the first to center on a female superhero — should post the best start for a standalone superhero film since Marvel’s “Black Panther” launched with $202 million in 2018.

“Captain Marvel” has already taken in $78 million in its first two days from 25 international markets, including $34 million on its opening day in China.

Universal’s third weekend of “How to Train Your Dragon: Hidden Kingdom” will finish second with about $17 million, lifting its 17-day domestic total to about $122 million. Lionsgate’s second weekend of “Tyler Perry’s A Madea Family Funeral” will follow in third with about $9 million.

“Captain Marvel” appears likely to pull in more than the entire take of the same weekend last year, which totaled about $140 million. It’s the start of a potential rebound from what’s been a dismal year at the North American box office, which has slumped by 27% to $1.57 billion through March 6. The 2018 total was $581 million ahead at the same point, thanks largely to the blockbuster performance of “Black Panther.”

Larson’s character will also appear in Disney-Marvel’s “Avengers: Endgame,” which opens April 26 amid expectations of a massive take for the fourth and final “Avengers” title.