Continue to Variety SKIP AD
You will be redirected back to your article in seconds
May 12, 2019 8:15am PT 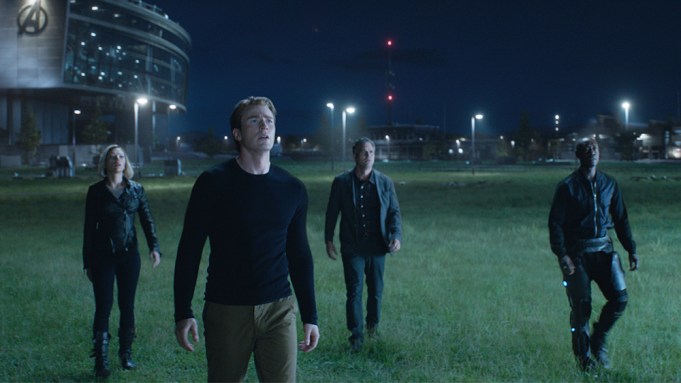 “Avengers: Endgame” officially passed “Avengers: Infinity War” ($679 million) and “Black Panther” ($700 million) to become the third-highest grossing movie of all time at the domestic box office with $724 million in ticket sales. It’s still the second-biggest film ever globally with $2.48 billion, pacing behind just “Avatar” with $2.78 billion.

However, “Endgame’s” third straight box office success didn’t come without a little competition. Warner Bros. and Legendary’s “Detective Pikachu” gave Earth’s Mightiest Heroes a run for their money. The studio’s live-action Pokemon adaptation pulled in a solid $58 million when it launched in 4,202 venues.

Goldstein has reason for the good cheer. The impressive start for “Detective Pikachu” signals a rare win for video-game to big-screen adaptations. As a whole, it’s a genre that’s filled with few hits. “Super Mario Bros.” and “Doom” are two of the more high-profile misfires, but even recent titles like Alicia Vikander’s “Tomb Raider” remake and Dwayne Johnson’s “Rampage” were not popular among video game enthusiasts.

“It worked because of the lighthearted nature of the film,” Goldstein said. “You don’t need to be a Pokemon fan to see the movie.”

But as competition from summer blockbuster season heats up, “Detective Pikachu” will need to rely on solid word of mouth to remain a draw among moviegoers. The studio is also expecting “Detective Pikachu” to resonate overseas, where the electric yellow creature is a fan favorite. It’s certainly off to a good start, amassing $103 million from 62 international territories for a global weekend of $161 million. It had the biggest bow in China ($40 million), followed by the United Kingdom ($6.6 million).

Audiences seem high on Ryan Reynolds’ snarky take on the eponymous sleuthing Pokemon, awarding the film an A- CinemaScore. Critical reviews were mixed, averaging a 64% on Rotten Tomatoes. Directed by Rob Letterman, “Detective Pikachu” is based on the popular Pokemon series and the 2016 video game of the same name. Justice Smith stars alongside an adorable animated Pikachu (Reynolds) as the two team up to find out why the boy’s dad went missing.

Not all new releases were as fortunate. “Poms,” an uplifting comedy from STX and eOne, debuted with a paltry $5.1 million from 2,750 theaters. Diane Keaton stars in the film about a group of seniors who form a cheerleading squad. The movie played to an older female audience, with women representing 75% of opening weekend crowds, while 85% were over the age of 25. Reviews were not kind. It carries a 29% on Rotten Tomatoes, as well as a B+ CinemaScore.

It’s been a rough month for STX as its animated adventure “Uglydolls” failed to pick up steam in its second weekend of release. The $45 million movie generated $4 million for a dreadful domestic haul of $14.28 million.

Terrible reviews didn’t hold back all of this weekend’s newcomers. Rebel Wilson and Anne Hathaway’s “The Hustle” launched on the higher end of expectations with $13.5 million from 3,007 screens. The United Artists Releasing comedy, a female-led remake of “Dirty Rotten Scoundrels” and “Bedtime Stories,” has a 16% on Rotten Tomatoes.

“The critics don’t always get to dictate what happens,” Erik Lomis, head of distribution for United Artists Releasing, said. “We’re very pleased with the results, particularly with all these huge movies like ‘Avengers: Endgame’ and ‘Detective Pikachu’ opening. We still hit the higher end of expectations, which comedies have not been doing lately.”

Lomis said the comedy delivered because it provided an escape for young women. Females accounted for 70% of moviegoers, with 69% under the age of 35.

“That communal experience of laughter is contagious,” Lomis said. “It’s irreplaceable. You can’t have that experience at home like you can in a theater.”

A number of holdovers rounded out box office charts. Sony and Screen Gems’ “The Intruder” secured the No. 4 spot with $6.6 million, bringing its North American bounty to $20.9 million. Lionsgate’s “Long Shot,” a romantic comedy with Seth Rogen and Charlize Theron, nabbed fifth place, adding $6.1 million this weekend for a domestic tally of $19.7 million. Both films had solid holds, dropping roughly 37% from opening weekend receipts.

Fox Searchlight’s “Tolkien,” a biographical drama about “The Hobbit” and “The Lord of the Rings” author J. R. R. Tolkien, debuted in ninth place with $2 million from 1,495 locations. The film, starring Nicholas Hoult and Lily Collins, marks the first Fox Searchlight title to be released under Disney since the studio purchased Fox’s film assets for $71.3 billion.

At the indie box office, Neon’s “The Biggest Little Farm” earned $101,000 from five locations, averaging out to $20,000 per venue. The documentary follows a couple working to develop a sustainable farm near Los Angeles.

Even with the unprecedented run of “Avengers: Endgame,” the box office is still pacing over 9% behind last year, according to Comscore. Popcorn season, which sees the release of a number of blockbuster-hopefuls including “Godzilla: King of the Monsters,” “Aladdin,” and “The Secret Life of Pets 2,” should continue to close that gap over the next few months.