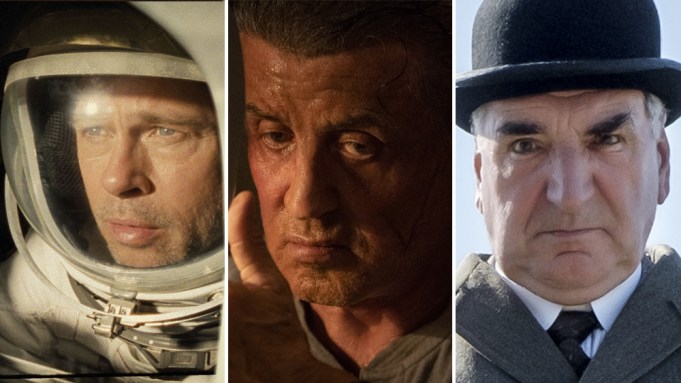 “Hustlers” and “Good Boys” proved that even in the age of Marvel dominance and remake mania, movies that don’t exist within an established franchise can still be box office draws. Can “Ad Astra” continue that trend?

The space drama — starring Brad Pitt and directed by James Gray — arrives on the big screen this weekend alongside two other nationwide releases with fierce competition among older audiences: Lionsgate’s “Rambo: Last Blood” and Focus Features’ “Downton Abbey.” All three titles are eyeing modest debuts around $20 million and will contend with the reigning champ, Warner Bros.’ “It: Chapter Two,” for first place on domestic box office charts. Based on Stephen King’s terrifying novel, “It: Chapter Two” collected $39 million last weekend and should pull in another $20 million during its third outing in theaters. After two weeks of release, the horror blockbuster has amassed $324 million worldwide.

“Rambo: Last Blood,” the fifth chapter in Sylvester Stallone’s action franchise, is expected to have the strongest start among the trio of newcomers and could earn as much as $24 million when it hits 3,500 North American theaters. Lionsgate anticipates a launch between $17 million and $20 million, similar to 2008’s “Rambo” ($18.2 million). Only one installment, 1985’s “Rambo: First Blood Part II,” has debuted above $20 million. That film bowed with $20.17 million and still ranks as the highest-grossing entry with $300 million in global ticket sales. The character’s latest outing in 2008’s “Rambo” ended its box office run with a moderate $113 million from a $50 million budget.

In “Last Blood,” Stallone is reprising his role as John Rambo, a role first introduced to audiences in 1982. His final go-around sees the Vietnam War vet journeying to Mexico to save his niece after she was taken hostage by the cartel. Adrian Grunberg directed the film, which was co-written by Stallone.

Like “Rambo: Last Blood,” “Ad Astra” looks to appeal to mostly older male moviegoers. Estimates show the sci-fi thriller could make $18 million to $20 million from 3,450 screens, which would be a rocky debut considering it cost over $80 million to make. Unlike “Dark Phoenix,” “The Art of Racing in the Rain” and other recent Fox duds that Disney has been tasked with releasing since acquiring the its film empire, “Ad Astra” has the benefit of strong reviews. But critical raves after its Venice Film Festival premiere might not be enough to attract the kind of crowds needed to make “Ad Astra” profitable.

Dramas, especially those of the science-fiction variety, are having a notably tough time at multiplexes. Part of the problem is that films in that genre often have intricate plots that are difficult to enticingly convey in trailers or on movie posters. Intergalactic spectacles like “Gravity,” “Interstellar” and “The Martian” were once massive box office successes, but recent titles like “First Man” and “Annihilation” have failed to hit with moviegoers. Universal’s “First Man,” similar to “Ad Astra,” focuses on a more personal journey. However, Ryan Gosling’s lauded portrayal of famed astronaut Neil Armstrong, along with hype for director Damien Chazelle’s follow-up feature after “La La Land,” wasn’t enough to save “First Man” from becoming a commercial miss. The $60 million film tapped out with $105 million worldwide.

While there are certainly no shortage of adult-skewed offerings this weekend, “Downton Abbey” should attract a more predominately female gathering. The film, a continuation of the Crawley family saga from the popular TV show, is expected to earn $16 million to $20 million from 3,076 venues. It’s unclear if “Downton Abbey” will break out beyond fans of the television series that ran for six seasons over the course of five years, and Variety’s Dan D’Addario noted the film is “explicitly designed as a balm for the aching hearts of those who loved watching the TV version.”

Series creator Julian Fellowes wrote “Downton Abbey,” which was directed by Michael Engler. Much of the original cast — including Hugh Bonneville, Elizabeth McGovern, Michelle Dockery and Maggie Smith — returned for the big-screen adaptation. Set in the late 1920s, “Downton Abbey” picks up with an official state visit by the king and queen to the Crawley’s family home. The British period drama kicked off last weekend at the international box office, where it has earned $11.7 million so far.