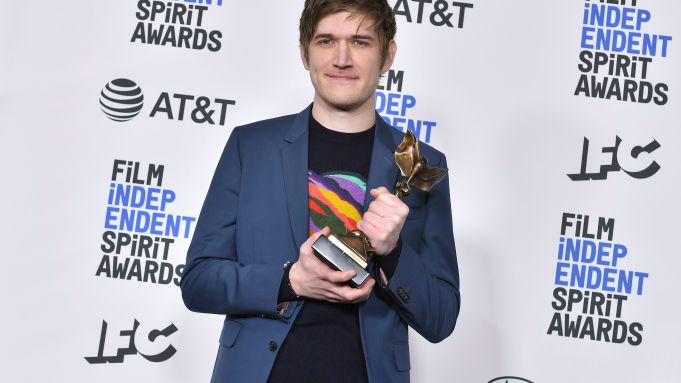 Bo Burnham won his third award in three weeks for “Eighth Grade” at the Spirit Awards and said he wants the film’s 15-year-old Elsie Fisher to direct him.

“I’d love to work with Elsie again,” Burnham said backstage after winning the Best First Screenplay trophy.  “She wants to direct so I’d love to switch roles and have her direct me.”

Burnham admitted that there’s no imminent project with Fisher, adding, “She’s 15 so I want to let her have her own life.”

Asked backstage about the biggest challenge he faced as the director, he responded, “The hardest part was child management issues like making sure the kids didn’t drown in the pool scene.”

Burnham also won the Writers Guild Award for original screenplay and the Directors Guild Award for first-time feature directing. He’s credited Fisher for all the victories for her portrayal of an awkward teen dealing with the final week of eighth grade and lavished praise on her in his acceptance speech on Saturday.

“I was told very often that I was a comedian for 13-year-old girls. and f— yeah I am! I’m proud of that,” he also said. “They deserve to be paid attention to.”

Burnham also admitted he was intimidated entering Hollywood after coming from his stand-up comedy career and thanked the room and community at large for embracing him. He portrayed a stand-up comic in  the 2017 comedy-drama “The Big Sick,” which won the same Spirit Award for Best First Screenplay Award a year ago for Kumail Nanjiani and Emily V. Gordon.